How can one even begin to write about a terrifying experience a family in Wilcox County endured on Sunday, January 22.  After you come upon the scene and gaze in incredible disbelief, you have to snap out of it and realize that it’s real.  Then when you learn that a family was in the tangled, twisted mess of what use to be their home, you stand again in incredible disbelief with eyes wide open.

What happened?  The family lived through a horrific nightmare – one that strikes intense fear in so many.  Tornado! And… they took a direct hit from the tornado!

Niesha Batton and her two young sons Dorian, age 2, and Da’marion, age 1, along with her mother, Charlotte Benjamin, and brother, Cornelius Hawkins, were all at home when the twister came knocking on their door.

The family had just returned home from a trip to Cordele and noticed the weather was getting wicked.  Niesha stated that they went inside and turned on the TV to discover that tornado warnings had been issued for their area.  As they watched, she said their mobile home began to rock and they scooped up the children and ran for a closet.  “We could hear the house being ripped apart,” Niesha commented. “We were terrified, and we were praying real hard.”  It wasn’t until after the tornado passed that the family realized that God honored their prayers to kept them all safe and sound.  At this point, Neisha said they still didn’t realize their home had been totally destroyed.  She said they began crawling and found their way to the ground.  Once they had made their way through the debris and was outside fully, only then did they realize a miracle had happened.  “We were all in shock, just in shock,” Niesha exclaimed.  The family lost absolutely everything, but Niesha, who was still in the same clothing since the storm, said that she was just glad they all got out.

Niesha Batton, who is employed at Snipes Finer Foods in Rochelle, Georgia, had this to say about the terrifying ordeal she and her family endured, “I thank God that me and my family made it out safe.  It could have been the other way around.”

Additionally, two other mobile homes were on the same property and Niesha’s uncles resided in them.  The tornado confiscated these two homes and where they are now is anyone’s guess.  All that remains of them is residual debris.  Fortunately, the uncles were in the town of Rochelle watching the NFC Championship game between the Falcons and Packers.

The family is currently staying with Niesha’s grandmother, who lives in Rochelle.

The tornado damage continued throughout parts of Wilcox County along Highway 280 and American Legion Road, where I came upon the home and business of Harold and Nancy Martin.  Nancy had this to say:

“We thank God Almighty we came out of this uninjured.  If you print nothing else about this story, print this.”  Those were her teary-eyed words.

The Martins celebrated 38 years of marriage this past Friday and recently remodeled their home.  “We knew it was coming,” Nancy exclaimed. They took precautions, and then went to the interior room of their home.  “All you can do is your best to prepare, but you really can’t prepare for it.  You have to sit, ride it out, and pray.”

Nancy said that when the Tornado was around them that they could hear glass breaking and banging sounds, like bottles and bricks were being thrown around them.  More alarming, they felt extreme pressure.  “It felt like something was pressing down on us,” she expressed.

Martin went on to say that the tornado activity only lasted several seconds, which was greatly in their favor.  Had the twister lingered, damage would have been even greater.

The Martins own Harold Martin Trucking Company.  One of the semi-trucks was no match for the tornado that picked it up and slam-dunked it upside down as though it were a toy.

Other residents were affected.  Harold Flemings, age 74, is a resident on a dirt road off of American Legion Road.  His son, Jamie Flemings of Fitzgerald, was aware of the extreme weather headed his way.  He left immediately to go retrieve his father from his home, and it’s a good thing he did.  It saved Harold from experiencing the horror of a large oak tree crashing down on his house and shop with crushing force.

Some residents on American Legion Road received minor damage to their home, yet extensive damage in their yard.  This was the case with the Jeff Harden family, who were not at home during the event.  The tornado danced around their house snapping numerous trees, while only removing shingles from their roof.  Horses and goats were freed from their confines and caring neighbors were on the scene quickly to secure the animals.

The path of the tornado was quite evident by the miles of trees that were snapped like a little twig.  Power poles were downed and power lines decorated the road for miles in an entangled array. Trees blocked roadways, but volunteer emergency crews were sacrificially on the scene in just a short period of time clearing the way.

The damage throughout Wilcox County is just too great for one to visit all areas, but it’s out there and lives have been greatly disrupted.

Sheriff Robert Rodgers reported that no fatalities or major injuries occurred.  He stated that, “Safety is now our  primary concern, and the community has come together quickly to help out their neighbors.”

A few photos of Sunday’s tornado damage is shown on the adjoining page. 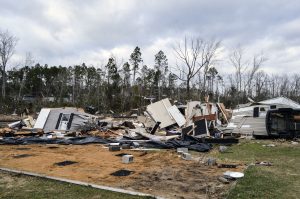 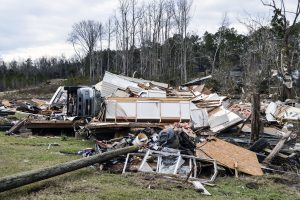