Chainsaws, gas cans, and flashlights were obtained through the Governors office in conjunction with the Georgia Office of Highway Safety director, Harris Blackwood.

Sheriff Hancock recognized a need and reached out to the governor’s office requesting funds to purchase 10 chainsaws to be utilized in the clean up of victims’ property from the aftermath of the tornado. He received the funds to purchase them and now, our neighboring counties are benefiting from the chainsaws.

The Sheriff’s office reached  out and continued assisting with the clean up of their affected communities.

They are fortunate to have a working relationship with Blackwood and the GOHS.  Knowing the need we had for flashlights, Blackwood also reached out to purchase flashlights. However, corporations donated the flashlights and batteries at no charge to the taxpayers. The flashlights were  distributed to the South Georgia counties that are still without power.

The Crisp County Sheriff’s office has been humbled with the number of calls we have had with people offering assistance to those families in need. We would like to thank Governor Nathan Deal and Mr. Harris Blackwood, as it would not have been possible without their cooperation.

We are thankful and blessed by the outpouring love expressed to the victims in our area. 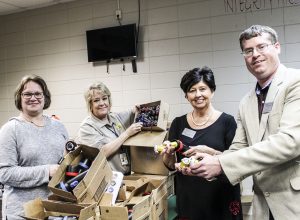