True love for the Crisp County High School Football Team was shown by the Crisp County Commissioners on Valentine’s Day, February 14, 2017, when they recognized the team for their outstanding 2016 season.

The resolution recognized the guidance and direction provided by Head Coach Shelton Felton, the Cougars Region 1 AAA Championship, and the most successful football season in Cougar history.

The resolution went on to praise the football program in Crisp County as being an integral part in the development of student’s educational, physical, and emotional well being as well as the entertainment and unifying social value it provides to Crisp Citizens.

The Commissioners were also pleased with the academic and social record of the players and praised them for their integrity, discipline, and Cougar pride.

The Resolution further recognized the 2016 Crisp County High School Cougar Football Team as Champions, on and off the field. 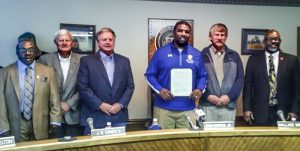