Convening for one of their regular meetings, the Cordele City Commission listened to two speakers, who addressed the city on Tuesday, February 21.

First up was Mr. Tamin Choudhury of the U. S. Small Business Administration.  Mr. Choudhury spoke on behalf of FEMA and the SBA to update the council on the disaster recovery efforts that have taken place.  The talk included brief promotional information about very low interest rates loans available for homeowners, renters, businesses, and churches, who suffered losses due to the recent storms and tornadoes.  Choudhury encouraged the commissioners to make this highly beneficial service known to anyone who might be in need.   He also informed the council that the Crisp County FEMA location had closed and that the Turner County location was closing soon, but that the Albany location would remain opened and that if anyone missed filing at the Crisp or Turner location, they could go to Albany or any FEMA location.  Choudhury also stated that the deadline to file for a disaster-relief SBA loan is March 27, 2017.

The Commissioners thanked him for his services to the community.

Up next was Miller Edwards of Mauldin & Jenkins Certified Public Accountants, who addressed the city concerning the health of their general fund.  He stated that 1.2 million of the fund, which is liquid, equates to about a 1.5 month contingency fund, and while that wasn’t bad, he recommended the city strive for a two month contingency goal.  He also stressed that the city look more closely at a three to five-year outlook.  The overall report to the city by Edwards was favorable.

Moving along, the Finance Director Elaine Kent informed the council that an interactive voice response (IVR) system was activated for customer convenience and that a 17% increase of usage has been realized.  Additionally, the Finance Department in an effort to identify ways to decrease wait times at city hall is encouraging customers to bring their actual paper bills in with them so the bar code can be scanned thus providing highly efficient and accurate service.

Fire Chief Augustus Telfair relayed to the council that his department still has available smoke detectors to give away to whoever needs one.

Housing and Urban Advancement Director Irene Cantrell reminded the council of a Board of Zoning and Appeals Hearing to be held Tuesday, February 28, at 4:30 p.m. in Room 236 in the Community Development Department at City Hall concerning a conditional permit request for Jack Hamilton.

Director of Utilities Debbie Wright was pleased to tell the council that water levels are up 20 – 30 feet since the fall 2016 and “looking good.”

Vesta Shephard requested that the commission move quickly to have lines painted on roads in the city where no lines were visible.  In response,  the commmissioners learned that the city’s striping  machine is “kaput”, but the cost of replacing it is too costly, so the city is reviewing contracting out this need.  In more road news, the city is attempting to acquire in-kind funds from the GDOT for repairs to Joe Wright Drive.

City Manager Edward Beach addressed old business of having the City Charter revised and reported a cost of $42,000 to do so.  He then enlightened the council that amendments could be made to the existing charter at a much lower cost.  A motion was made to this end and approved.

In other business, a resolution was passed that all city employees will not receive any favorable services from the city other than what the regular citizen would receive. 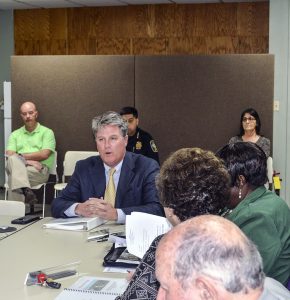