Reports by the Crisp County   Sheriff’s Office and Georgia State Patrol were merged/edited by     M. E. of Cordele Dispatch

At approximately 1:30 p.m. Tuesday, February 21, 2017, Dispatchers with 911 dispatched deputies to a report of a gas drive off that just occurred at the Plantation House, located at Exit 92 on I-75.

Deputy Chase McNeese spotted a vehicle matching the description, a silver Nissan passenger car. He initiated a traffic stop on the driver of the vehicle, northbound at Exit 97.

While exiting the vehicle, the driver of the vehicle swapped places with the passenger and fled North on I-75.

Deputy McNeese pursued the vehicle as it traveled in excess of 100 mph. The driver continued driving erratically, changing lanes as it crossed over into Dooly County.

At approximately Mile Marker 115, the driver crossed the median, traveling back south and exited at Exit 112.

GSP CPL Taunton and GSP Commander Jon Posey, who were four to five miles behind the action, were coming up towards Exit 112.  Posey advised Taunton to deploy stop sticks if he could get to them on time.

Posey observed the       violators to continue on to Exit 112 in wreckless disregard of human lives and was able to successfully perform the pit maneuver and bring the vehicle to a stop.

The occupants of the Nissan exited the vehicle without further incident, Posey made the arrest, and the violators were taken into custody by the Crisp County Sheriff’s    Office.

The vehicle was confirmed stolen out of Nebraska.

Among the charges are Use Of License Plate For Purpose Of Concealilng Or Misrepresenting Identity Of Vehicle, Driving While License Suspended Or Revoked, Reckless Driving, Fleeing Or Attempting To Elude Police Officer, Failure To Stop At Stop Sign.

The investigation is ongoing. 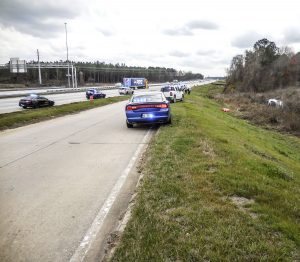 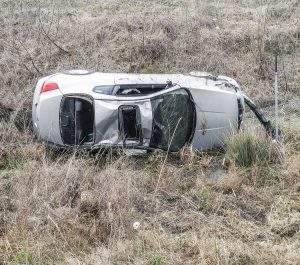