The night was real good for Crisp County EMS at the Region 8 banquet held on Tuesday, March 22, in Moultrie.

Each year, the region awards those who were responsible for saving a life.  Several of these Paramedics were listed as saving more than one life.

Not at all surprising to his co-workers, but a surprise to him, the EMS Director of the Year was awarded to David Edwards.  David has over 41 years of experience as a Paramedic and has served as Crisp County EMS Director for 30 years.  He is an active member of the Cordele Lion’s Club and will serve as President in the upcoming year.  David has also been elected to the state EMS council and will serve beginning this year.  He is active in all state EMS events and has been the recipient of this very award years ago.

“It would take great effort to find a director more professional in his appearance and demeanor on a daily basis,” said Dr. Sheila Southerland, Medical Director of Crisp County EMS.  “David endeavors to manage up every employee to make them the best medic to serve our community.  He is an exemplary EMS Director, one who serves our community with compassion and vigor.  He is most deserving of this award.”

The last award of the night went to Crisp County EMS as EMS of the Year.

Crisp County EMS stood out among their peer group of 27 counties for several reasons.  In addition to the high volume of calls they respond to annually – in August of 2016, they were awarded for their excellence in the delivery of cardiac care.  The State Office of Rural Health, together with the Georgia Hospital Association Research and Education Foundation, chose Crisp County EMS based on their outstanding performance in the provision of STEMI Care, thereby creating a culture of safety within this community.

Crisp County EMS has also implemented a successful Mobile Integrated Healthcare program which has reduced the number of frequent fliers to the Emergency Department as well as the 30-day hospital inpatient readmissions. 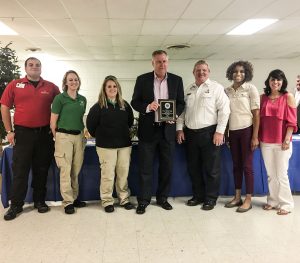 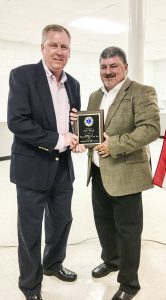