Chief Deputy Sheriff Denise Youngblood presented a request to the Commissioners for an EMA grant for 200 NOAA weather radios for community disbursement, which was approved by the Board.  Youngblood also informed the Board that a Sheriff’s Deputy hit a deer when en route to an emergency call. 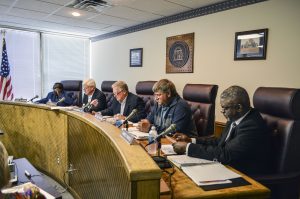