A new world was on the horizon back in 1492 when Columbus set sail from Spain, and just three years later in 1495, the genius visionary Leonardo da Vinci created a robot.

Skipping through more than half a millennium later to now, another vision has come to fruition with another kind of robot right here in Crisp County.  Yes, it’s a new day for Crisp Regional Hospital, and the da Vinci Surgical System has dawned.

“People think care is better in a bigger town with doctors you don’t know,” voiced Crisp Regional CEO Steven Gautney, who delivered opening remarks at a Lunch and Learn program held last Wednesday at the hospital.  “The board and medical staff have always wanted to keep Crisp Regional on the cutting edge of technology and to keep standards of what they have now at a higher level.”

One could say that Crisp Regional being on ‘the cutting edge of technology’ is an oxymoron, because the da Vinci Robotic Surgical System greatly minimizes cuts when performing surgeries.  Dr. Courtney Pettiford, general surgeon at the hospital, has been performing robotic surgeries with da Vinci since 2013 and on February 9, 2017, he successfully completed the first surgical case at CRH with da Vinci.   Surgeries performed using this method are much less invasive than open surgery and cuts are very small.  Due to this preferred, advanced surgical option, patients see less complications, very minimal blood loss, shorter hospital stays, and speedy recoveries.  Additionally, patients have less scarring and likely will not have a prolonged need for narcotic pain meds.  In fact, patients undergoing robotic surgery have stated that they have hardly any pain and have only required an aspirin.  This is due to da Vinci’s pivoting motions and its ability to repair incisions from the inside without protruding through muscle thus reducing post-op pain.  Futhermore, due to the efficiency of robotics, surgery time is greatly reduced allowing patients to stay under anesthesia for a shorter amount of time.  On a more remarkable note, nearly every person that undergoes da Vinci robotic surgery has requested to walk to their car and will go home the next morning.

“We are posed to grow here,” said Dr. Pettiford.  “We are going to grow exponentially with this device.”

The growth is already being realized as many different type surgeries have been perfected using da Vinci.  In fact, two very common surgeries, removal of a gallbladder and uterus, can be performed through one small incision through the belly button.

The beauty of using da Vinci is that it gives the surgeon a highly magnified, 3D High Definition view of the area that is being operated on, which allows the surgeon to be very precise and accurate in “hitting the mark.”

It is no wonder that excitement is mounting in the community with the da Vinci Surgical System, a method that was approved by the FDA nearly 20 years ago. 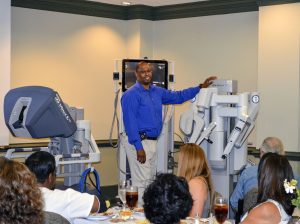