r were present as 21 Trojans took their final march across the stage to accept their diplomas and take the ritual walk down the center aisle.

All the graduates qualified to receive either the Zell Miller Scholarship, Hope Scholarship, or Hope Grant.  Numerous outside scholarships were also awarded to these outstanding, close knit seniors.

The invocation and welcome was delivered by Hannah Clemons, presentation of the class gift by Madison Bishop,  special music by Colton Farrow, and presentation of diplomas by Ray Clemons.

Salutatorian Joanna McGalliard took the podium to deliver a humble and moving address that was filled with praise and thanks for her class, the staff, and the unity and acceptance she received from the “very tightly knit group of people” at Fullington.

“I came to Fullington two years ago. I learned very quickly that this is a very tightly knit group of people, more specifically this class. They love each other like brothers and sisters, and fight like brothers and sisters too. Before I began attending, I had mentally prepared myself for the fact that I might be seen as an outsider. I might be ignored or left out, and I was okay with that. But my expectations were wrong. They brought me in and accepted me as one of their own.”

Near the end of her speech, McGalliard continued with “thank each of you for the memories that have been made throughout my two short years here. Y’all will always hold a place near and dear to my heart. Congratulations to each and every one of you.”

She closed her address with “follow the path God has placed for you. Whatever you do in the future, do with all your heart. Do it with passion.”

Valedictorian Austin McKinney delivered his upbeat address that began with gratitude and thanks to Fullington for providing a Christian-based education and thanks to parents for their continued love and support.

McKinney noted that he has spent his entire academic education at Fullington  and since Kindergarten, eight of his classmates have remained at the school together and are graduating together.

A touch of humor in McKinney’s address brought laughter to the crowd, “I would like to thank Sam, Will, Braxton, Daniel, and Dalton, for all the good times we had together in the sports that we played and all the memories we made. Participating in the first junior pro football team and being a part of the 2015 Baseball State Championship team are especially unforgettable. Even though my fondest memories come from playing sports, there were also special moments which happened in the classroom. Wednesday has always been an important day of the week for everyone in the class. Wednesday is Chicken Biscuit Day. Hannah pronounces Wednesday in her own unique style. She likes to refer to it as Wenzday.  To this day, I don’t know why. My favorite memory happened my sophomore year. I had geometry that year and it seemed I was the only one who understood anything that Mrs. Tonya was saying. One day while helping Sam on a few of his problems, Sam told me that if he received Star student; he would nominate me Star teacher.

Unfortunately, as you might have heard, I did not receive Star teacher.”

McKinney continued to comment that he and his classmates were in the business of helping each other succeed.

“The one thing you could count on with this class is that you could always receive assistance from someone. We were all in it together trying to help each other succeed,” were Austin’s grateful words.

McKinney closed his speech saying, “Remember, anything is possible for those  who believe and to cherish the life that God has given you. Jeremiah 29:11 states, “For I know the plans I have for you,” declares the LORD, “Plans to prosper you and not to harm you, plans to give you hope and a future.” It is time to set goals for your future. I believe that no matter what path you choose to follow as you progress into your future, you will be the best that you can be.  I will leave you with a quote from Thomas Edison, ‘Our greatest weakness lies in giving up. The most certain way to succeed is always to try just one more time.’ ”

Stay classy, Class of 2017. This is your valedictorian, Austin McKinney, signing off.

Headmaster Ken Shealy is very proud of the Fullington Academy Class of 2017. 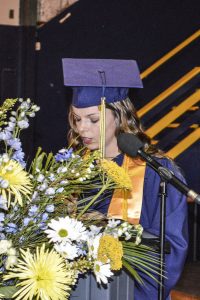 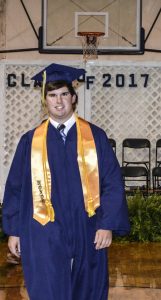