One of the largest classes in Crisp County High history graduated Friday night to a full-capacity crowd. The Class of 2017, all 256 of them, walked across the stage and received their diplomas. After Madilynn Rae Thompson gave a beautiful rendition of the National Anthem, Deaunna Jonae Holsey led in the Alma Mater followed by the invocation given by Maya Victoria Young. The Student government President Shelby Elizabeth Farrar welcomed everyone. Kadaja Zaquane Williams gave the senior address.

The class Salutatorian Morgan Ellie Lawson spoke on “what will we remember?” Starting with September 11, 2001, when all of them were mere babies, and moving on to the financial crisis of 2008 and how it shaped the world. Lawson said, “Will we remember the first day of kindergarten when we sat beside our first friend? Or maybe we’ll remember our first boyfriend or girlfriend? Our favorite class? Our least favorite class? Will our most vivid memories begin in 6th grade when our two elementary schools combined, and many of us met each other for the first time? For some, the most important memories will be found on sports fields, as we practiced alongside teammates. For others, the most poignant moments will be carved from musical performances. Still others will find their recollections stemming from school clubs and outreach programs. Despite our chosen activities during the past eighteen years, we are all here. Each of our stories and memories are different, unique, but we have all shared memories in this small town that have shaped us. I did not walk in your shoes, nor did you walk in mine, but all the same, we have memories that intertwine. We have achieved amazing successes, and discouraging failures. We are all human after all” …In closing she said, “my hope is that we remember our similarities, and not our differences.”

Following Lawson at the podium was class Valedictorian Emily Gwynn Mercer. She spoke about, “The Hardest Lesson”.  Giving an impressive analogy about how she wants her classmate to fail, quoting J.K. Rowling who once said, “ It is impossible to live without failing at something, unless you live so cautiously that you might as well not have lived at all- in which case, you fail by default.”

Mercer went on to say, “I am encouraging you to try new things and step out of your comfort zones. Learn from your mistakes and work towards becoming better in the future. I know some of you, like me, have a fear of failing, but as Robert F. Kennedy said, “Only those who dare to fail greatly can ever achieve greatly.” I believe everyone can learn from their failures, and you have the choice of either learning to fail or failing to learn. Getting over a fear of failure can be quite difficult, but being too scared to ever try anything new won’t get you very far. Sometimes we need a little help dealing with our own mistakes.”

Following salutatorian and valedictorian addresses, High School Principal Dr. Rusty Sowell gave the presentation of candidates and Dr. David Mims Superintendent of schools accepted the candidates. It was then they were joined by Mrs. Michelle Grinnell in the awarding of the diplomas. 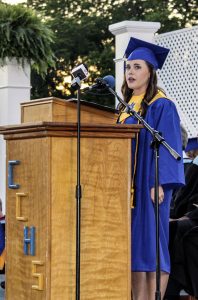 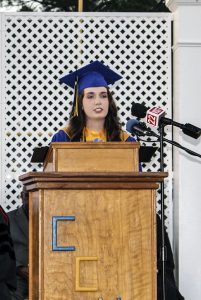