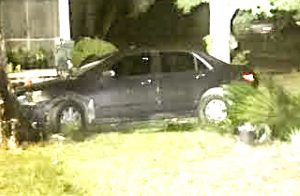 On June 12, 2017 at approximately 9:50 pm, 911 reported that an armed robbery had just occurred at Kentucky Fried Chicken on 16th Avenue in Cordele. Deputy Jesse Barfield was in the area of 20th Avenue East and observed a dark colored Honda Accord traveling at a high rate of speed. The Honda also matched the description of the vehicle used in previous armed robberies in Cordele. Once the driver saw Barfield, with his blue lights and sirens activated behind him, he sped up and attempted to elude Deputy Barfield. The driver, lost control of the vehicle and ran into the yard at 801 West 19th Avenue. The suspects fled the area on foot. Sheriff Hancock and Officer Haynes with the Cordele Police Department arrived on the scene. Sheriff Hancock requested the deployment of the Crisp County Sheriff’s office tracking team. Information was exchanged with Captain Farrow with the Cordele Police Department, who was at the scene at KFC. The vehicle was towed from the residence and held for processing. The Georgia Bureau of Investigation assisted in the processing of the vehicle and collection of evidence. If you have any information relating to the robbery that could speed up the arrests of the suspects, please notify the Cordele Police Department, Capt. Scott Farrow 229-273-3102 or the Crisp County Sheriff’s Office, Lt. Teresa Miller, 229-276-2600. There is a reward being offered in the arrest and prosecution of the criminals.