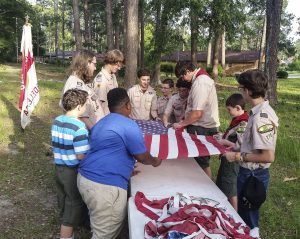 While many people enjoyed a long holiday, these local Boy Scouts, who spent Saturday morning placing flags on graves at the Andersonville National Cemetery, gathered at the Cordele Boy Scout Hut to respectfully retire several dozen American flags.  Before the ceremony began the participants spent more than an hour cutting the flags into pieces while Scoutmaster John Frost grilled hamburgers for the Scouts.

A flag ceases to be a flag when it is cut into pieces. A flag should never be torn up like an old bed sheet. It should be cut up with scissors or shears in a methodical manner.

The U.S. flag is more than just some brightly colored cloth…it is a symbol of our nation.  Seven red stripes and six white strips; together represent the original 13 colonies that gained us liberty. The red stripes remind us of the lifeblood of brave men and women who were ready to die for our country.  The white stripes remind us of purity and cleanliness of purpose, thought, word and deed.  The blue is for truth and justice, like the eternal blue of the star-filled heavens.  The stars represent the fifty sovereign states of our Union.

The ceremony began with the American and Troop flags presented to the assembled group.  After the colors were presented by Life Scouts Joshua Smith and Timothy Lull, the boys, their adult advisors, and their guests recited the Pledge of Allegiance, the Boy Scout Oath and Law, and the Outdoor Code.  A fire was started in a portable fire pit.

As the boys took turns cutting a flag into pieces, each of them read from a script that described the significance and meaning of each part of the flag.  After the flag was cut into pieces, the participants then reverently placed pieces of the former flag onto the fire. After the Scouts each had the opportunity to place some of the former stripes onto the fire, veterans John Frost and Jimmy Sharp, along with current active duty soldier Jon Lull each added one of the former cantons to the flames.  Everyone present had the opportunity to add pieces of cloth to the fire.

Should you have a flag that needs proper disposal, please let us know.  Either bring it by the hut some Monday evening or contact Scoutmaster Frost.

Troop 270 is sponsored by the Cordele First United Methodist Church and meets every Monday evening at 6:30 in the Cordele Boy Scout Hut, located at 1100 South 3rd Street.  If you know of any boy ages 11-17 who may be interested in becoming ma Boy Scout, please have him come by the Boy Scout Hut on Monday evening or contact Scoutmaster John Frost, owner of Brady’s Best Buys, for information.