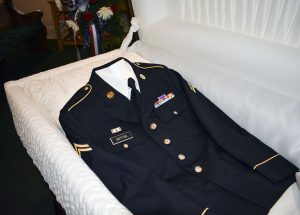 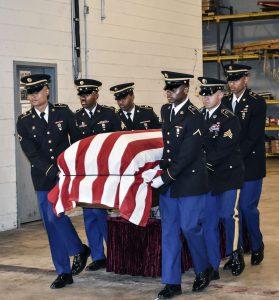 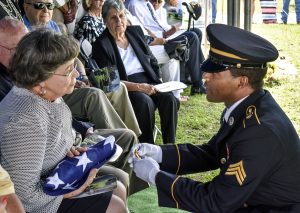 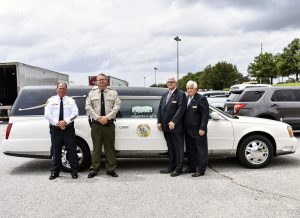 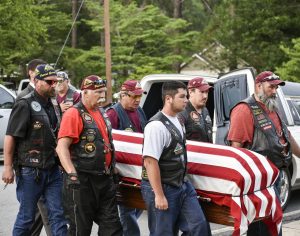 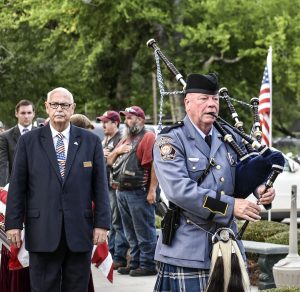 After 67 Years…Fallen hero laid to rest

“I will be back,” Leroy Sutton assured his uncle as he departed to serve in the Korean War conflict.  These were the last known words spoken by Leroy to a family member, and his words rang true nearly 67 years later.

On Thursday, June 22, 2017, Leroy did return home to the country he loved and died for.  Officially missing in action since November 2, 1950, the remains of Corporal Leslie Royal “Leroy” Sutton landed at Hartsfield-Jackson Atlanta International Airport and were royally escorted back to his former town, Rochelle, Georgia.

At the airport, the ambience was of anticipation, reverence, and deep longing to welcome home a fallen hero to properly lay his body to rest.  Family and others were present awaiting the presentation of Sutton’s casket.  Before the reveal, family members were called into a holding area to first view the casket, and the beauty of sweet closure brought tears of sadness, but greater still, tears of joy.  Soldiers in the Georgia Army National Honor Guard served as pallbearers to present the American Flag draped casket to the awaiting public outside.  They exited through Door 8 and descended down a long, red ramp while those outside stood in attentive salute and hands over hearts while our glorious colors flew poignantly, yet jubilantly, as Corporal Sutton embarked a limousine to take his final journey home.  The threat of rain before his arrival had delayed until his casket embraced the outside air, when a downpour ensued as if tears of celebration from heaven were shed and then abruptly ceased once he was place in his carriage home.

Leading that way home were vibrant lights of protective blue followed by a string of vehicles, patriotic motorcycles, and even more blue as the motorcade of the Georgia State Patrol, the Patriot Guard Riders, and other processional participants escorted Corporal Sutton down the I-75 Interstate before turning off onto Highway 280, Exit 101, in Cordele to travel the final leg home straight into Rochelle.

Leroy’s trek home on the super slab was adorned with greeters on various overpasses, who wished to honor his return and show support to his family.  Ernest Jackson, who formerly lived in Rochelle and worked with Sutton, was one of those on the overpass.  “I wanted to witness my friend come home.”  On the country road, greeters were aligned at numerous intervals beginning at the Pilot Station in Cordele, through the country, throughout Pitts, and more country.  His hometown of Rochelle was brimming with people and flags to welcome their own back home.  The celebration was great as Rochelle’s only soldier who did not come home from the Korean War finally returned to set the record straight.

Arriving at Frazier and Son Funeral Home and upon Sutton’s casket being placed inside, Troop Commander Captain Kevin Rexroat of the Georgia State Patrol discharged his men from their escort duty. “It is very unfortunate we do this, but it is still our honor to bring someone home after so many years.  The brotherhood between law enforcement and military has been evident for years and will always remain true,” Captain Rexroat humbly voiced.

Time passes, people die, and memories fade.  So much time had elapsed since Sutton was MIA, that his parents and all eight of his siblings were deceased.  Memories of Leroy’s early years are few as so many have passed, yet one close relative, Sutton’s niece Vivian, remained to share her memories of him.  She also was assigned to take the helm of networking with the United States Army and be proactive in his final arrangements.

Vivian Beach White is the daughter of Jeannette Sutton Beach, who is Leroy’s sister.  She and her mother resided with Leroy and their mother, Getrude Harris Sutton, for a period of four years.  While living in Rochelle, Vivian attended elementary school there and her memories of Leroy are fond.  “He was fun and always playing jokes,” Vivian reminisced.  “He interacted well with children and enjoyed pushing them in their swings on the playground and complied with their requests to push them higher and higher.  He loved children and was protective of them,” she recalled.  Another cherished memory included that of Leroy taking a trip to Portland, Oregon, and when a huge snow had fallen in the area, he proceeded before the children making large tracks so they could walk through the snow.   Yet, two memories Vivian has of Leroy are ones she wishes she didn’t possess.  The first was that of him leaving for Korea.  “I knew I would miss him and all the fun we had.”  The second memory would bring haunting dreams as one day her grandmother received a telegram that Leroy was missing in action.  Vivian was given the daunting task of walking to Rochelle High School, where her mother Jeannette was a teacher, to tell her about the telegram.  Vivian was only age nine at the time and this memory has remained vivid in her mind ever since.  Her mother would always encourage her to remember the good times she had with him and now that her Uncle Leroy is home, maybe the numerous dreams of seeing him walk away from her on the sidewalk as she yelled out to him will now cease.

Leroy’s father, Baxter, had already passed before Leroy went off to war and his mother Gertrude, a very strong woman, never gave up hope that her youngest child would return.  When the Army declared him deceased as of December 31, 1953, she purchased a slab that was placed at the gravesite where she was to be buried.  Her unyielding faith and hope we now know has come to fruition.

Long ago, the actual date of his demise unknown, Corporal Leslie Royal “Leroy” Sutton entered into his true rest in the arms of his Lord and Savior.  At his formal send off on Saturday, June 24, 2017, other facts concerning Leroy were revealed.  The most important one is that Leroy accepted Christ as his Savior on April 25, 1940, and was baptized May 5, 1940.  He had a Christian heritage and it has been said that he was always at the church.  Leroy’s grandmother started the first Sunday School at FBC Rochelle.  He helped to dig the basement at the church and worked on the church in other areas.  This ministry was a labor of love for Leroy.  He graduated from Rochelle High School and also served during WWII with the Merchant Marines.  Pastor Philip West, who officiated the ceremony, exclaimed, “Our real celebration is knowing that he was a child of God.”  West read from letters that Leroy had written home.  “This is a bad war, a bloody war.  I’m suppose to call it a conflict, but I call it a war,” he penned.  In Leroy’s letters home, he always asked about the well being of family members and wrote that he was thankful that “God let him live as long as he has.”  Leroy was known for the love he had for his Lord, his church, and his community.  He gave his life in service to the country he loved.  That love was greatly reciprocated and appreciated as the return of his remains were celebrated and reverenced in so many ways.

Attending the funeral was Tommie Kelley, age 91, who was a long time school mate with Leroy.  Also attending was Kim P. Jones, who owns a hair salon in Vienna, Georgia.  Kim is Korean and she did not know Leroy, but wanted to attend his funeral to express in person her gratitude and that of the South Korean people to those who gave their lives to “save us from the tyranny of Communism.”  Kim left a letter to the family of Leroy and in it she revealed that she feels blessed to be in the United States, and knows that she would not be here but for sacrifices of people like Corporal Sutton.  Kim had written that there is a large statue of Gen. Douglas MacArthur in Inchon, Korea.  “We shall never forget what General MacArthur and his valiant officers and men of the United Nations Command did here for us and for freedom.  And until the last battle against the malignant infection of Communism has finally been won, may we never forget it was he who said: ‘In war, there is no substitute for victory’.”  Kim had affectionately signed her letter “with a grateful heart.”    The powerful letter was read at a family reunion, which followed the Memorial Service, and it touched them tremendously.

Leading the way out of church, the same as it began, Amazing Grace was played on the bagpipes by Dan Bray of the Georgia State Patrol Honor Guard.  Bray was also present at the airport when Sutton arrived and piped out “Going Home” when departing and once again when he first arrived in Rochelle.  “It’s an honor to be of service.  God has blessed me with this gift, and I’m honored to give it back,” voiced Bray.

Corporal Sutton was then escorted to his final resting place at Morningside Cemetery in Rochelle with full military honors and three-gun salute.  A folded American Flag and three golden bullets were presented to Vivian White by the U. S. Army.  The Patriot Guard Riders presented an encased American Flag to her.  After the service, Vivian gave the encased flag to Leroy’s first cousin, Ralph Sutton, who had spent several years seeking information in attempts to locate his cousin.  Ralph continues to reside in Rochelle.  Additionally, Vivian was presented with Leroy’s medals, one being the Purple Heart.

Frazier & Son Funeral Home in Rochelle and Dale Frazier was humbled to have charge of Sutton’s final arrangements.  “It’s an honor for us to be entrusted with the arrangements to bring Corporal Sutton to his final resting place with his parents in Morningside Cemetery,” stated Frazier.  There was an option for Leroy to be buried in Arlington National Cemetery, but knowing the strong hope of his mother that he return home, Vivian made the right decision to bring him back home.

Sixty-seven years ago, Leroy assured his uncle that, “I will be back.”   He is back, he is home, he is honored, and the people of Rochelle and his family are overjoyed he has returned.