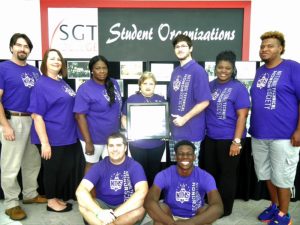 The Silver Star of Excellence Award recognizes NTHS chapters who have exhibited superior achievement in community service. The chapter had to submit an application to be considered for the award, and several criteria had to be met. The focus of this national award is to identify a need within the community, develop an action plan, drive a service learning initiative into action, and getting NTHS members actively involved

in meeting local needs. NTHS encourages its chapters and members to be actively involved in making a positive difference in their local community.

Over the past year, NTHS has participated in numerous community service projects. Kari Bodrey and Katrice Taylor are the co-advisors for the Crisp County Center chapter of NTHS. In order to be a member of the NTHS, students must be nominated by an instructor, be a fulltime student at SGTC for at least two semesters, and have a minimum cumulative grade point average of 3.7.

The student must also demonstrate leadership abilities and display a commendable attitude, good mentality, worthy character, credible achievement, and a desire to pursue a career in the field of his or her technical study.

The National Technical Honor Society has recognized outstanding student achievement in workforce education since 1984. Over 1,500 schools and colleges throughout the U.S. and its territories are affiliated with the NTHS. Induction into NTHS is a benchmark – the highest award for excellence in workforce education in America. For more information on the National Technical Honor Society, visit www.nths.org.