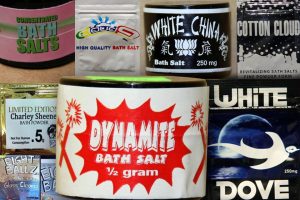 Recently we have had people asking about the legality of drugs often referred to as “Bath Salts”. The term “Bath Salts” is used to describe a number of recreational synthetic drugs such as cathinone, methylenedioxypyrovalerone (MDPV), methylone, mephedrone and others. The granules or crystals resemble true bath salts such as Epsom salts but are really designer drugs. These illegal drugs are usually packaged in containers or bags stating “not for human consumption” in an attempt to elude law enforcement.

Bath Salts are illegal in both the United States and the state of Georgia. They are a Schedule I controlled substance and anyone possessing or distributing these drugs can be charged with a felony under the Georgia Controlled Substance Act. For information contact the Crisp County Sheriff’s Office.