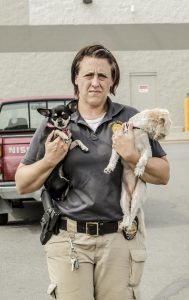 On Friday July 28th around 4pm Cpl. Andrew Roufs was called to Walmart on E 16th Avenue, Cordele in reference to  abandon dogs in a hot-parked car.

The two little dogs shown to the side were rescued by Animal Control Officer Amy Stokes.

With temperatures outside at 93 degrees and the heat index at 103, the inside of the truck in the sunlight was over 130 degrees.

While others were trying to locate the owners inside the store, they came out walking casually and met with Corporal Andrew Roufs.

One week before this Officer Charles Hill was dispatched to another hot car animal incident.

In this case charges were  levied against two other women for leaving a mother and several puppies in their truck.

In that case the outside temperature was 98 degrees.

The offenders did state that didn’t feel like it would hurt them.

In both cases the temperature in the autos had soared to extremely high levels.

pertaining to pets. The state does however have an animal cruelty law. This law pertains mostly to aspect of causing harm to the animals.

The dogs were seized by the city and the drivers were charged with animal cruelty in both case’s.

The City of Cordele is taking a no excuse posture on these animal abuse cases and you will be charged if animals are harmed.