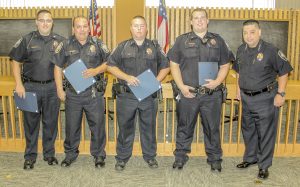 Cordele Police Chief Rob Rodriguez handed a number of promotions and awards at a ceremony held at the City Hall on Tuesday.

The citation presented to Brandon Rivers said, “Ptl. Rivers outstanding performance, exceptional diligence, and devotion to duty reflects great credit upon themselves and were in keeping with the highest traditions of the Cordele Police department and the law enforcement profession.”

Sgt. Montgomery, Sgt. Pheil and Corporal Rivers were all recognized for thwarting what would have been an auto theft but was

an entering auto charge. Rivers and former Cordele P.D. officer Winston Haynes were given a letter of commendation for a  May 3rd killing on 9th st south.