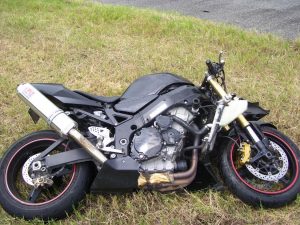 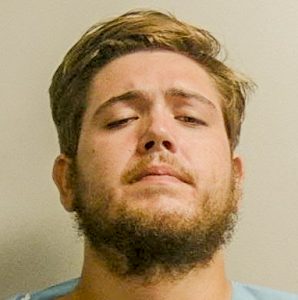 CORDELE – Jacob Michael Meyer 21 of Lakewood Ranch, Fla. was as they say “riding high on a hawg” Wednesday, August 9, 2017,  as he ran from State Troopers and Deputy Sheriff’s from three counties, the chase started in Peach County and came to an abrupt end in Crisp County as the motorcycle rider crashed.

Jon Posey of POST 30 in Cordele, received word of a chase in progress from Peach County. Traveling at speeds in excess of 120 mph, Meyer was charged with speeding, wreckless driving, driving on suspended license, fleeing and attempting to elude, no insurance, following to close, interference with government property, theft by receiving stolen property and DUI.

Meyer attempted to go around Trooper Bowen at the 98 mile marker on I-75 when he struck the rear of  Bowen’s car and lost control of his motorcycle and turned over in the medium.

Meyer suffered minor injuries, where he was taken to Crisp Regional Hospital and was treated and released and has since been bonded out of the Crisp County Jail. The Georgia State Patrol Trooper Steve Bowen and Sgt. First Class Jon Posey are investigating the incident.