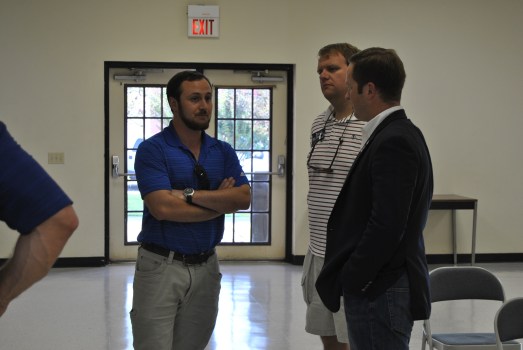 CORDELE — Bruce McPherson, a former Green Beret and Georgia native, announced today he was running for United States Congressional District 2 seat in Georgia. Before he made his announcement he visited constituents in Cordele Tuesday evening to meet, greet and explain the platforms he was running on.

As a senior in high school. McPherson witnessed the events of September 11 and decided he would not stand idly.

“To me it felt like this was the defining moment of our country, my generation ,” McPherson said. “ I thought about folks that were 17 or 18 when Pearl Harbor happened and it wasn’t about being drafted, it was about where do I sign up. I felt like standing on the sidelines wouldn’t be the right thing.”

He planned on joining up after high school, however, a former Green Beret told him to go to college first before joining.

McPherson joined his college, The University of Georgia’s ROTC program and upon graduation enlisted as a Second Lieutenant and a Platoon Leader in the 2nd Battalion, 506th Infantry Regiment, 101st Airborne Division.

“The second district here is in an economic down spiral and I believe that you have to have representation in (Washington) D.C. that has moral character and leadership experience,” McPherson said. “To me, that’s my whole military career. The leadership experience I got as a young twenty-something year old leading men and women into combat, you can’t forge that leadership anywhere else.”

Some of the platforms that McPherson is running on are national security, economic revitalization, education and protecting farmers and small business.

In Southwest Georgia, also known as Congressional District 2, 30 percent of people live below the poverty line, something McPherson plans on changing.

“The people that are really hurting are small farmers, small businesses and even big business that hire people like you and me,” McPherson said. “The regulatory and tax environment has made it very difficult for small business and family farms to survive.”

Water regulation and how farmers can irrigate their crops has hampered businesses in the past, McPherson says that the rollback on the regulation last year has made a successful impact already and would like to continue to roll it back.

He also plans on increasing education in the district by teaming up local higher educational institutions such as trade schools to give bigger businesses an incentive to settle in the district.

“There are a lot of good trade schools we can partner with and companies to train workers. There’s a lot of assets here,” McPherson said.

So why visit Cordele?

“This is a hotbed of political activism, there are a lot of folks that want to see a change,” McPherson said. “ Small businesses and farmers who are getting hit hard are suffering and I’ve had great reception here.”

“We’ve got a great market for labor and plants have been here before,” McPherson said. “As a congressman you can do more than vote, you can market this area and sell businesses on coming here. This a great place to open a plant and we’re ready to go to work.”