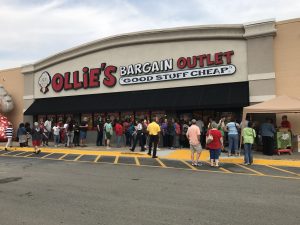 CORDELE — Hundreds flocked to Ollie’s Bargain Outlet for a chance to take in the newest store to hit Cordele.

Early Wednesday morning local residents of Cordele and Crisp County lined up outside for the grand opening and ribbon cutting.

The Cordele store opening is the chain’s 23rd in Georgia which began in Pennsylvania.

More than 200 stores later, it has come to the Watermelon Capital with one goal in mind according to District Manager David Browning, bringing consumer’s low prices.

“We have specials, but a lot of people know of Ollie’s already,” said Browning. “We’re a bunch of name brands that we buy on deep discount and we’re much cheaper than our competition.”

Patrons lined up for a chance at deals beginning earlier than the ceremonial ribbon cutting early Wednesday morning.

“We expect several thousand people to come visit us today,” Browning said. “Our last opening in Statesboro brought in a total of 4,800 people the first day.”

The store carries a variety of items such as food, toys, merchandise and housewares.

The impact this has on the community is bringing around 60 jobs for locals as well as spending $250,000 on remodeling, all of which Browning said went to local contractors.