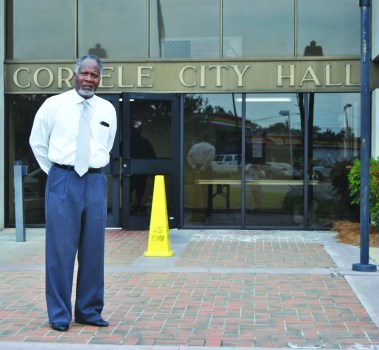 ordele — Ulysses Morgan Jr. has always had a calling. At a young age it was music, but it became more than that. A visit to church on a Sunday changed him from being a musician to reverend.

“It was phenomenal,” Morgan said about the transition. “It’s not an overnight thing, even though you go to seminaries, it still takes a task of training. I’ve learned through many pitfalls and mistakes and the main one was listening to other people.”

As a new convert, his pastor saw something greater than just a musician, assigning him to the ministry.

He came down to Cordele and became a minister here when the opening was available and has stayed here for more than forty years.

Four decades is a long time, it’s time to know people, time to see the changes of the city, which is something he prides himself on.

“Cordele is a city of too great a potential to be in the shape that it is in,” Morgan said. “You’ve got major highways running through Cordele, you’ve got a high volume of cargo trains coming through and I-75, one of the busiest highways in the country running not on the outskirts of Cordele, but through Cordele.”

One trend he has noticed is the emigration of Cordele’s youth moving away for school and jobs.

“There are jobs presented in this city but there are no incentives for these young people to start a career in Cordele,” Morgan said. “Atlanta is getting these people, Albany, Columbus, Savannah. These are places that are thriving because they have placed value in their young people and in their city.”

His approach to this election is looking towards the future, about how to implement changes that will positively affect and allow generations down the road to benefit.

“Something is wrong, that needs to be corrected,” Morgan said. “I’m running because I want to find out what is wrong and see what I can do to gracefully help the people not only in Ward Two, but the city as a whole.”

Safety and economic are two important platforms that he is running on. He really places an emphasis on serving his ward, but says, “No one politician can actually get things done. One can present the idea, but you have to convince people to get things implemented.

Morgan says his motto for the campaign is “Make a Difference.” He remembers first arriving in Cordele at the Old Deacon’s Church where the roof would leak when it rained and compares where it is now — a pristine facility, night and day from what it was.

Recreation facilities and youth programs, not only athletics are things that he would like to have implemented. Not only would it allow children an outlet to be focused and occupied, but it would reduce crime.

“We need some programs that we can talk to our young people and bring some programs into that area that will cause their minds to be more interested in succeeding in life than criminal life.”