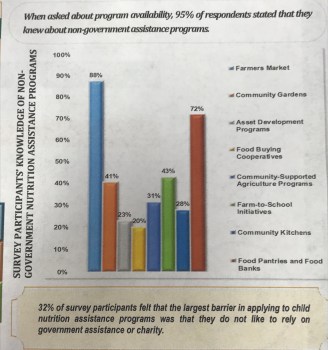 Family Connection Director Sherry Evans led a discussion on what were some of the factors and problems with nutrition in Crisp County.

In the three categories — Health problems, Health Education and problems affecting families, one factor stood out in all three. Poverty.

In a Rural Child Poverty Nutrition Center survey on Food Access and Program Awareness, research says that about 32.5 percent of Crisp County is at the threshold of poverty, while more than half of the children in the county are living in poverty.

The federal poverty threshold is defined as $20,160 a year for a family of three. In the survey, which results came from 2016, half of the respondents said they were food insecure.

The food insecurity was brought up during the meeting with some members saying a problem was resident’s awareness of nutrition and the programs that are available to them.  Programs such as the National School Breakfast and Lunch Program, Summer Food Service Program and the Supplemental Nutrition Assistance Program all are available to Crisp students and residents.

Crisp County Nutrition Director Lisa Leggett said this summer they were in the second of three years on their summer food program for students. She reported that this year they had tried to serve hot meals, but because they did not know a good estimate of individuals being served there was some food wasted.

The Crisp County Family Connection will meet next on October 26 at 8:30 a.m. in the Dowdy Building.