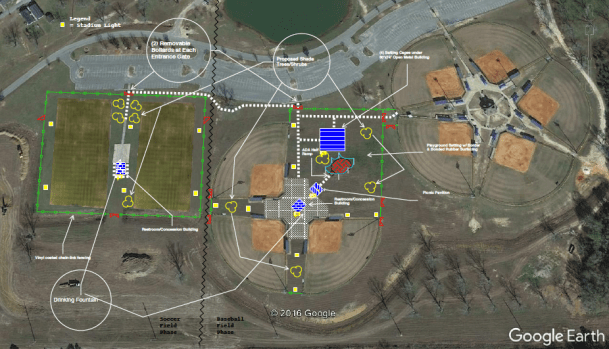 CORDELE – Construction for the Youth Ball Complex Phase II is set to begin in November next month. The cost of construction will be a little over $1.6 million. Phase II began as an idea put into SPLOST in 2011 and a plan was put together in March 2017. The original plans called for five baseball fields and two soccer fields, but funding wasn’t going to be enough. Crisp County Recreation Department took out two baseball fields and added in a pavilion, playground and batting cages.

“We saw a need there. Everybody we talked to who comes to tournaments and to local league play always talked about those things. We decided to put that in there because that’s what everyone was requesting to do, what they wanted,” Director of the Recreation Department Eric Bozeman said.

The new baseball fields are going to help bring in about 40 baseball and softball tournaments next year. That is about eight more tournaments than this past year when 32 tournaments played at the current facility. The tournaments are a combination of girls’ softball and boys’ baseball with a high school tournament hosted once a year as a fundraiser for the high schools.

The tournaments bring in over a million dollars worth of revenue yearly in tourism money. Last year brought in over 400 teams and about 20,000 people visited the park.

The two soccer fields are going to provide some needed changes for both players and spectators.

“The soccer facility excites me the most because that gives the soccer crowd a place where they can call home. They’re not having to play on the outfields of baseball fields. They can actually have their own facility,” Bozeman said.

“On our side of it, it expands our capability to serve the public. We’ll have more games played at one field without trying to find other fields. Of course it’s a whole new thing for soccer, having two dedicated soccer fields. That’s something we haven’t had. So it can help expand the soccer program here in Crisp County,” Patton said.

The picnic pavilion will be 30 ft by 40 ft near the playground area. With all the new facilities, there will also be new pathways connecting them together along with additional trees and shrubs.