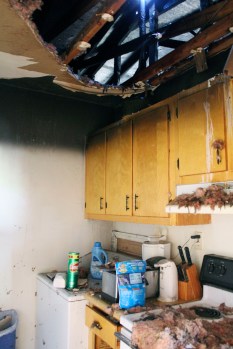 Erica O’Neal/Cordele Dispatch Apartment 406C was one of three apartments to catch on fire on Sunday afternoon.

CORDELE – Three apartments, 406A, 406B and 406C on 23rd Avenue West caught on fire on Sunday, October 29 sometime after 4:00 p.m. The Cordele Fire Department received a call about the fire at 4:28 p.m. Residents in the apartments were quick to react when they realized their homes were burning. One resident, Arieona Peacock who lived in apartment 406A remembers what she was doing when the fire began.

“We were downstairs, my mom was cooking and I thought something was burning in the stove. I got up to check on it and nothing was burning. I went upstairs to get some things and my mom screamed up the stairs, ‘Get out! The house is on fire!’ But it wasn’t our house, it was the apartment behind our house,” Peacock said.

“There wasn’t anything electrical to cause the fire in that area,” Fire Chief Augusta Telfair said.

Once the fire began in front of apartment 406C, flames quickly licked up the back wall of 406A and 406B. A water pipe burst in apartment 406B and there is extensive smoke damage. All residents of the apartments escaped uninjured. The resident in apartment 406C was not home at the time of the fire. The fire is currently under investigation by Cordele Police Department.