50 years of service Annelle Carden tells it all 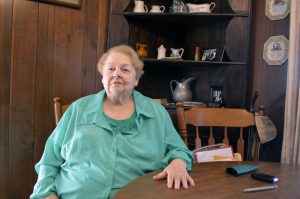 “The celebration they had last month was just beautiful. I couldn’t believe some of the things they wrote. The room was decorated so pretty. Everything was gold, so gold. It’s a great organization. It’s an altruistic sorority,” Annelle said.

Alpha Delta Kappa (ADK) is a sorority made up of women educators. The sorority was founded 70 years ago in 1947 by Agnes Shipman Robertson, Marie Neal, Marion Southall and Hattie Poppino. Annelle Carden has been a member of ADK for 50 years and remembers what it was like when she first joined.

“When I started ADK, the ladies wore hats and gloves. Very formal. They did the handshake, wore the pin, and we met at homes in Vienna and Wilcox County. We had teachers scattered all over and we would meet in their homes. It was coffee and desserts,” Carden said.

Alpha Delta Kappa is an international organization with members all over the globe. According to Annelle, ADK is an altruistic group of teachers. Every month members do something for the community.

“My favorite part of ADK is the fellowship, the closeness and the concern that they have for each other. The willingness to help each other out, as well as anybody that needs it that we can help. We donate glasses to the Lion Club every year. We give clothes to Hand of Hope. Each year, a graduating senior going into education, we have a little money for them as a scholarship,” Annelle said.

Annelle was a teacher for 24 years and spent the majority of her time teaching at Crisp County High School where she met her husband, Tom Carden.

Annelle grew up in Dawson, Terrell County about an hour away from Cordele. Annelle began teaching at Arabi Elementary School while she finished up her senior year in college at Shorter University in Rome, Georgia.

“I’d take my finals and tests each week on the phone. You had to know it, you wouldn’t have time to look it up. You had to be able to talk right off the top of your head and keep going,” Annelle said.

Anelle continued to teach at Arabi Elementary School until it closed in 1964 when Crisp County decided to consolidate the schools into one building.

She taught one summer school semester in Dawson where she grew up, but didn’t enjoy that as much.

The following fall semester, Annelle began teaching history at Crisp County High School which is where she was invited to join ADK. Annelle taught World History for the last 10 years of her teaching career. Before then she taught Georgia History, American History, Economics, Government, and Geography to 6th, 7th, and 8th grades.

When Annelle’s first child was born, she dropped out of teaching for a little while. When she went back, she became a permanent substitute teacher.

Annelle got her Master’s Degree in History from Georgia Southwestern State University in Americus.

“I am one of the last of the teachers that have a lifetime license. So I can still teach. They don’t do that anymore. It’s got that on my certificate. It’s not easy to get. They quit giving out lifetime licenses a year or two after I got mine,” Annelle said.

The local teacher is passionate about community support and continuing to teach in any way that she can. Annelle has a map of the world hanging on her kitchen wall. With a twinkle in her eye, she describes how she taught geography to her classes throughout the years.

“Now, what is that shape of Africa? Would you say it’s maybe a left-handed handgun if you stretched your imagination? Alright, now go to the very top of it, up there with Morocco. Do you see the whale’s tail? Now you come around to the East, and you’ll see the Red Sea and the Persian Gulf. There’s a slug, you know old slug horns? And then you come down to India and that’s the old man crying a teardrop that’s Sri Lanka. And then you come up and you’ve got Korea hanging there and Vietnam kind of like Florida,” Annelle said.