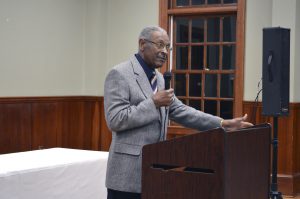 CORDELE – John Wiggins won the runoff for chairman of the Cordele City Board of Commissioners against longtime elected official, Zack Wade yesterday. Wiggins earned 54.35% of the votes while Wade received 45.65% of the votes.

“I am really excited about this. Cordele has spoken. It was a good, clean, honest race. Zack gave it his all and I appreciate him for all of the things he has done for the city. We have just got to progress, we have got to move. I think this is an opportunity for us to really stand up and make a statement and say that ‘we want the city to progress. We want it to move and we need to do everything we can in order to make that happen.’ I’d like to thank the community for all of the support they’ve given me and thanks for their votes. I promise that I’m going to do my very best,” Wiggins said.

Wade had been the commissioner chairman for the last 37 years since he was first elected in 1990.

“First I’d like to thank my family, particularly my wife and sister-in-law for all of the hard work they have put into

this campaign. There was a committee of very close friends who stuck by me and encouraged me all of the way. As chairman of the Cordele City Commissioners since 1990, I am proud to have been part of the leadership team that has kept Cordele moving in the right direction. Congratulations to the new chairman of the City Commission of Cordele,” Wade said.