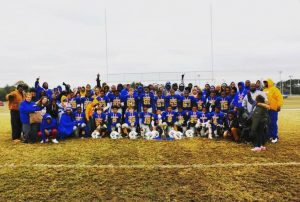 The 10 and under Crisp County Recreation Department football team won the state championship of the state of Georgia. The final score for the game was 18-8.

After going 7-0 in postseason play the 10 and under Crisp County Recreation Department football team are champions of the state of Georgia. Initially the boys won the annual Kiwanis Bowl Tournament held in Fitzgerald. En route to their victories over there, the boys beat Fitzgerald 28-0 and Irwin County 32-0.

The baby Cougars, who were coached by Head Coach Cliff “Pip” Merritt aka Pip Saban, David Manders, Craig Jackson and Allen Ellenberg, would go on to whitewash the opposition by a total score of 181-22 in all games. Next up for the Cougars was a trip to district play in Tifton. The Cougars easily dispatched Mitchell County 39-0 and Americus 27-8. These wins handed the Cougars the District Title. Then came the South Regionals, also held in Tifton, where the Cougars blanked Effingham County 25-0 and held off a very tough Liberty County team 12-6. Now having claimed the South Georgia Title, the Cougars would have a December ninth date with Jones County from the North Georgia division in the GRPA State Championship.

Once again the Cougars traveled down to the host city, Tifton. On a rain soaked field in 40-degree weather, with a 15 mph breeze that made it feel like freezing, the baby Cougars started their date with destiny. Get the picture now; it is cold, wet, and just miserable conditions. That, however, is football weather and the baby Cougars began their clinic. After kicking off to the Greyhounds, the Cougars defense stuffed the Jones County offense as they would all day. The Cougars would not give up a first down until there was 2 minutes and seven seconds to go in the game. Crisp County got the ball and handed it off to number 15, Cayden Daniels, and the track star took the corner on a 40-yard romp to put the Cougars up 6-0 in the first quarter. The Cougars missed on all of their extra point opportunities. The next score would come with little time left in the half. Daniels took the handoff and cut back in the middle slicing his way through the Jones defense on his way to a 62-yard dash to the end zone. Daniels, the State of Georgia’s 100 and 200-meter sprint champion from back in the early spring, was way too fast for the opposition. Daniels would finish off the Cougar scoring early in the fourth quarter on a two-yard tote to put the Cougars up 18-0. Jones County finally got a little offense going when they got a first down for the first time with 2:07 remaining. Jones would bust a long run to score, and got the two-point conversion to draw within 10 points, but it was too little too late. The story of the postseason was really how stifling of a defense Crisp County had, pitching four shutouts in seven games and never allowing more than a touchdown in any of their games. As an added note, none of the 22 points scored on Crisp County in the seven games came early. In fact, all of the scores were late ”give me” touchdowns. On defense Zymorion Hudson, Bernard Carter, Cameron Williams and Jordan Fox led the way with several big plays throughout the game.

“I am very proud of these boys. They are such a special group of young men,” said Head Coach “PiP” Merritt. “They always fought and never back down. They did what you asked of them, just a pleasure to coach them,” Merritt added.

As a note, the Georgia Recreation and Parks Association began their state level football play back in 2010. Before that Crisp County along with many other communities competed in the annual Turkey Bowl in Tifton. In the eight years of Crisp County participation, we have won 13 district titles, been state runners-up three times and won two state championships. As I said before, the future is very bright!