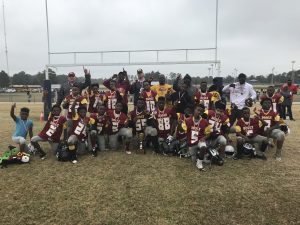 The Dooly County Recreation Department ended another great football season this past Saturday & Sunday in Tifton GA at the GRPA State Tournament. DCRD’s 7 & 8 year old Bobcats defeated McIntosh County 19-18 in a first round overtime win and then played Long County in the State Championship game on Sunday. The 8U Bobcats where defeated 35-24 by Long County but still earned a 2017 GRPA State Runner-up trophy in a well fought game to the finish. DCRD’s 11 & 12 year old Bobcats defeated Jeff Davis County 22-16 and then Wilkes County 20-0 in the 1st and 2nd rounds of the playoffs on Saturday. The 12U Bobcats came back on Sunday and defeated Metter 26-14 to earn the 2017 GRPA State Championship trophy. This marks the 3rd straight State Championship in a row for DCRD in football over the past 3 seasons, but it was the first one for these 11 & 12 yr old kids who have been so close every year since they were 7 years old.  We are very proud of all these kids and coaches for all their hard work and effort every week to make them champions in the end. Go Bobcats!!!