Olson Honored for Volunteer with IDC

Olson graduated Georgia Tech in1961 with a Bachelor of Science in Electrical Engineering. Olson was hired at Crisp County Power in 1964 as an engineer. Olson then became a General Manager in May 1966 and served for 25 years until he left in March 1992 to become a CEO of the Municipal Electrical Authority of Georgia (MEAG Power). During his tenure at Crisp County Power, Kilowatt hour (KWh) sales increased by 400%. Olson was a member of the Chamber Board of Directors for 26 years. Olson was recognized as Crisp County Citizen of the Year in 1980, primarily for actions in proposing and creating new Cordele/Crisp Industrial Park. Olson is primarily responsible for the creation in 1987 of the Cordele/Crisp Industrial Development Council (IDC). Olson has been a part of numerous other local boards and activities and is very active in recruitment for Norbord and other industries to our community. Olson is the founding original Board Member of MEAG Power and was heavily involved in its creation. While CEO of MEAG Power, Olson was involved in the creation of The Energy Authority which has become the primary energy trader for public power nationwide. 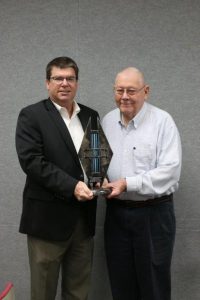