According to the Georgia State Patrol Post 10, Americus, which investigated the accident, the crash occurred at 5:47 a.m. Monday on Lamar Road in rural east Sumter County.

Dustin Seth Stafford, 28, of Cobb, driving a 2001 Chevrolet Silverado pickup truck, was traveling west on Lamar Road. He told the investigating state trooper that apparently he fell asleep at the wheel. The truck traveled across the westbound and eastbound lanes and onto the south shoulder of Lamar. It then reentered the roadway, crossing the eastbound and westbound lanes again before traveling onto the north shoulder of Lamar. The truck continued to travel west, striking the corner of a bridge and traveling through several trees. The truck overturned while crossing a creek.

After crossing the creek, the truck struck several more trees and came to rest west of the creek in the tree line north of Lamar Road, on its top.

The driver was not wearing a seat belt, according to the report, and sustained injuries to his upper extremities. He was taken by EMS to Phoebe Sumter Medical Center in Americus.

Stafford was later transferred to Macon for further evaluation. 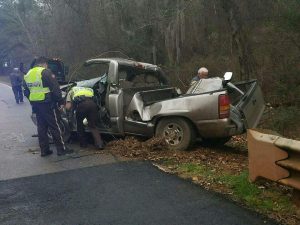 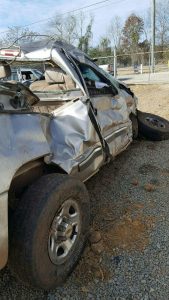