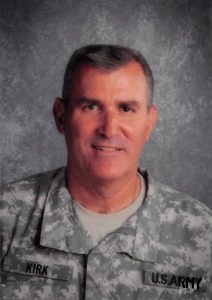 Due to health and family issues, Kirk has decided to retire to spend more time at home.

Kirk has been teaching for the last 34 years total and spent the last five years at the high school. Kirk had also taught at Crisp County High School back in the mid 1980s and into the early 1990s.

“I coached the mock trial team, we won the state championship in 1993 and placed 9th in the nation at the Nationals. And then I did the same thing up in DeKalb and won another state

championship with mock trial and went to Pittsburg, and placed 4th in the nation,” Kirk said.

Lt. Col. Kirk joined the army in 1984 in Cordele as a Private in Company B National Guard on 8th Ave (today it’s Company C). Then Kirk went on to basic training at Fort Benning and attended Officer Candidate School the following year (1985) and was commissioned as a Second Lieutenant. Kirk spent a few years in the 48th Brigade and went from a Platoon Leader, to Staff Officer up the ranks to Company Commander.

At the same time Kirk began serving in the army, he also began his teaching career.

“I ended up teaching in DeKalb County for about 10 years and then another 10 years in Gwinnett. The first time teaching here (CCHS) I taught for eight years, in fact right after I joined the Guard, I also became a teacher at the elementary school over there at Southwestern (today is Crisp County Elementary School) on 24th. I started out there with 6th grade and then transferred to the high school the next year and taught just about every social studies class you could teach,” Kirk said.

Back in 1990 Kirk was mobilized for Operation Desert Storm in the Gulf War, which meant he had to leave the classroom. Later, after returning home from overseas, Kirk left Cordele in 1993 and moved up to Atlanta with his family. Kirk was mobilized again after 9/11 and spent a year at Fort McPherson writing the orders that sent most of the guards overseas, including his own son. Kirk stayed in Atlanta for 20 years before drastic events happened.

“In 2012, my life radically changed. In the space of one month, I had my hip replaced, broke my arm, had my thyroid removed for cancer, my house burned down, and I got married. It’s crazy, but it really makes you focus on living. It makes you appreciate everything you’ve got. Makes you also realize that all of your stuff is just stuff,” Kirk said.

That’s when Kirk decided to move back down to Cordele with his wife, Joyce to get away from it all in Atlanta. Soon after, Kirk saw the open teaching position at Crisp County High School and has been working there ever since.

Even though Lt. Col. Kirk is retiring, he’s still planning to be there for the students at Crisp County High School and help coach after school as a volunteer.

“Sergeant Williams will officially be the head of all the teams, but I still intend to come over here as a volunteer coach after school to help with all of these teams. In the army, you’re taught you don’t leave a soldier behind on the battlefield,” Kirk said.

“He came in about the same time I started and he’s done a really good job getting our unit organized and on track. Put a lot of time and effort into bringing some things to the program, he started the military ball. The cyber team has done extremely well under his leadership and he’s brought some good guidance and experiences to the program,” Sowell said.

Superintendent David Mims also commented about Lt. Col. Kirk leaving CCHS and the way he has been a role model for the students.