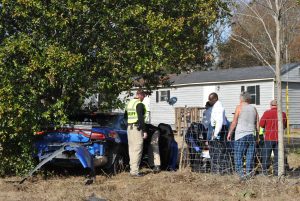 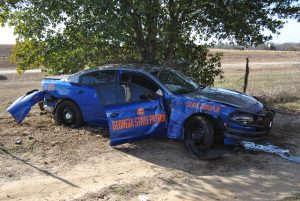 CRISP COUNTY- Denavian Jarqueaz Golson, a 17 year-old sident of Thomasville, Georgia was arrested Friday, January 26, 2018 around 10:30 a.m. Corporal Duckworth attempted to initiate a traffic stop on a white Honda Accord for excessive speeding on GA Hwy 33 at mile post 4. The driver failed to stop.

While responding to assist with the chase, a Georgia State Patrol (GSP) Trooper was involved in a one-vehicle accident at the intersection of US Hwy 41 and Hwy 300. He sustained injuries and was transported to Crisp Regional Hospital.

Crisp County Sheriff’s Deputies continued the chase from GA Hwy 33 to Rockhouse Road, and then onto GA 401/I-75 North bound. Additional GSP units assisted and made two pit maneuver attempts on the suspect vehicle. On the second attempt, a Crisp County Deputy used his vehicle to block the suspect vehicle from

401/I-75. Golson was arrested and transported to Crisp County Detention Center. At this time, Golson is charged with Fleeing and attempting to Elude, Speeding in Excess of Maximum Limits, Driving without a License, and Possession of Marijuana Less than an Ounce. Further charges are pending.

Sheriff Billy Hancock thanks the Georgia State Patrol for their assistance and regrets anytime a law enforcement officer is injured while performing their duties. Citizens should always be proud of the men and women who serve them.