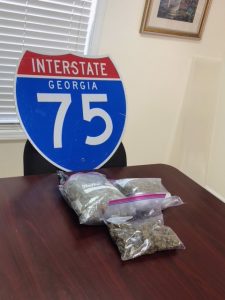 Travis Letaz Williams, 32-year-old male, and Megan Marie Fussell, 25-year-old female both residents of DeFuniak Springs Florida were arrested on January 26,2018 at approximately 11:00 AM. Deputy Williams initiated a traffic stop on a 2005 Silver Dodge for failure to maintain lane, and speeds less than minimum on GA 401/ I75. Upon approaching the vehicle Deputy Williams noticed the odor of marijuana coming from the vehicle. Deputy Williams also observed drug paraphernalia in the console and floorboard of the vehicle. Williams and Fussell stated there was no marijuana in the vehicle. A search of the vehicle resulted in three large bags containing approximately 2 lbs. of marijuana. Consequently Williams and Fussell were placed under arrest and transported to Crisp County Detention Center. Williams is charged with Possession of Marijuana with Intent to Distribute, Failure to Maintain Lane, and Speed Less than Minimum. Fussell is charged with Possession of Marijuana with Intent to Distribute.