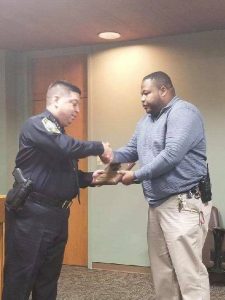 CORDELE– Lieutenant Ketorie Sales is leaving Cordele Police Department after 13.5 years of service. Lt. Sales is still going to be in the area with his next job as an investigator with the Crisp County District Attorney’s Office. Sales went to school at Crisp County High School and attended Albany State for college. Soon after, Lt. Sales began working at the Dooly State Prison in Unadilla and then moved to work at the Dooly County Sheriff’s Department in 2001 where he worked for three years.

Afterward, Sales received his certification from Cordele Police while working with them for a couple of years and then went back to Dooly County Sheriff’s Department where he worked on the STEP Unit (Selected Traffic Enforcement Program).

Since Lt. Sales came back to work at Cordele Police Department, Sales spent 10 or 11 years working in investigations before being promoted to Lieutenant.

“Cordele is a good department. You get a lot

of experience and a lot of training. I kind of did miss investigations when I left it, but this job gets me back into it. I’ll get a chance to look at cases not only in Crisp County but also all of the other counties in the circuit. I’ll give my input and help out where I’m needed,” Lt. Sales said.

“We don’t like to see any employee leave, but at the same time we know that part of our responsibility is to develop our employees so that they can move on to bigger and better things. I’m happy for him and he’s done a really good job here during his tenure and he’s been able to build on certain skills and abilities that are going to be useful somewhere else. We wish him the best, he’s always a part of the CPD family,” Chief Rodriguez said.