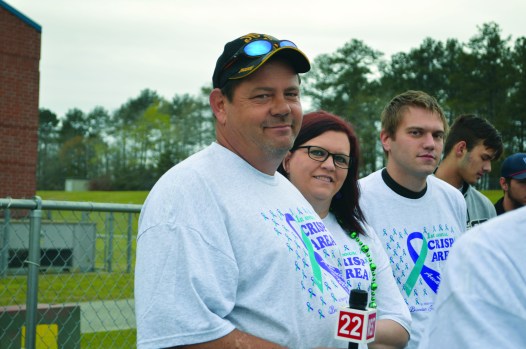 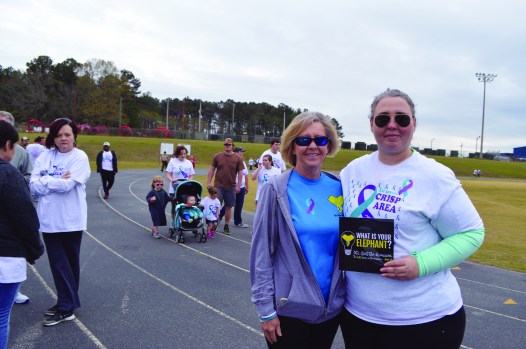 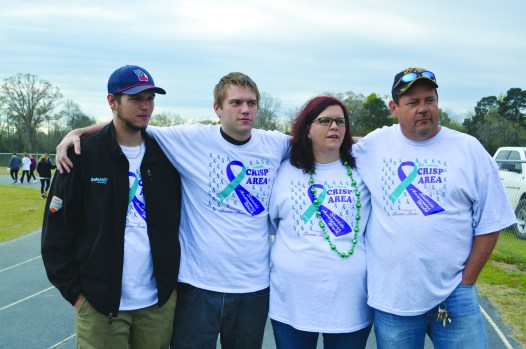 CORDELE – St. Patrick’s Day began cold and cloudy in Cordele, but in the morning hours, a crowd of people gathered on the Crisp County Recreation walking track.

In total, approximately 160 people registered to walk in Cordele’s first suicide awareness walk. This first walk was in memory of Brandon Jacobs, a 20-year-old man who committed suicide 10 days before his 21st birthday on February 3, 2016. The idea of a walk started with Brandon’s mom, Becky Vaughn wanting to do something to get people to talk about suicide. After posting about her desire to do something about it on Facebook, the Cordele-Crisp Chamber of Commerce contacted Becky to begin planning her idea into action. Brandon’s family and close friends were in attendance of the walk that Saturday morning.

Before the walk began, Brandon’s stepfather spoke first to the crowd followed by a word from Phil Streetman and a rap written by childhood friend, Justin Anderson.

“By the grace of God we are here today. You don’t have to walk; this is about a conversation, getting a conversation started. So walk one lap, walk a hundred laps, or just find somebody, make a new friend, start a conversation,” Danny Vaughn said.

Justin Anderson recited an emotional and passionate rap about Brandon taking his life, wishing he were still here.

Becky Vaughn and others, who helped organize the event, want to have it every year. Each year will be in memory of a different person who has been a victim of suicide. The event this year was completely free to encourage everyone in the community to attend.

The suicide awareness walk was sponsored by:

The Cordele-Crisp Chamber of Commerce

Representatives from the National Alliance on Mental Illness (NAMI) had a table set up at the walk. Jeri Hughes, a member of NAMI wants to ensure that people know sources of support to get help.

A woman named Michelle Cope was in attendance as well with Yellow Elephant decals. Cope began the Yellow Elephant as a ministry based in Moultrie, Ga. in memory of a close friend who committed suicide in 2012.

“The decal shows the light in the darkness, ‘the light shines in the darkness but the darkness never overcomes it,’ which is John 1:5. The tusks are semicolons because your story is not over yet. I wanted it to be a decal so when people see it, they know they’re not alone. They can start the discussion. So when people ask ‘what is this elephant?’ it gets people to ask the question. What is your elephant? Is it finances? Is it you’re being bullied? Do you have alcoholism? You address that and what caused that,” Cope said.

According to the pamphlet about the decal, the elephant is to be displayed on the back window of a person’s vehicle that wants to offer assistance to people willing to share their need for help.

Both NAMI and the Yellow Elephant plan to attend next year’s suicide awareness walk.

For anyone in need of help in preventing a suicide, or knows someone who needs help, call the Georgia Crisis & Access Line at 1-800-715-4225 or visit online at GeorgiaCollaborative.com. Help is available 24/7 for problems with developmental disabilities, mental health, drugs or alcohol.