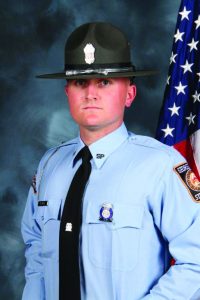 CORDELE – Hearts are heavy in the community after a Cordele native Georgia State Trooper died in a wreck on Monday, March 19. At about 5:20 p.m., 23-year-old Tyler Parker was traveling East on Arabi-Warwick Rd. with his 2-year-old daughter in the backseat. Parker was off-duty driving his personal truck when the vehicle hydroplaned and hit a pecan tree on the front driver’s side. Parker was wearing his seatbelt, but the entire seat was ripped from the car on impact, ejecting him. The rest of the car on the left side caved in and everything was pushed into the backseat. His 2-year-old daughter survived with a fractured skull and some bleeding in her brain. She was rushed to a hospital in Macon where it looks like she will pull through and recover.

Parker was well known, he was born and raised in Cordele and had started his own family in this community.

“I’ve known him since he was a toddler. His father was a trooper, and he grew up with my son. He’s always been a good-hearted person, always had a smile on his face. He has made an excellent trooper because of his dedication to the public and to this job. He’s going to be sorely missed. He was a good trooper, and a good dad,” Posey said.

Parker graduated from Georgia State Patrol Trooper School in 2016 after working some time for the Crisp County Sheriff’s Office.

Sheriff Billy Hancock  recalls watching Tyler playing baseball with the cougars, growing and maturing in his determination to become a Georgia State Trooper.

“I believed in him and was fortunate enough to have Tyler work with the Sheriff’s office at the young age of 20. Tyler later would fulfill his dream, following his dad’s footsteps, becoming a Georgia State Trooper. Even though we don’t always understand His plan, we will rely on our faith and trust that His plan has been carried out. I will be praying for comfort, peace and healing for Tyler’s family and his extended family of men and women in blue. He will be missed, but never forgotten,” Sheriff Hancock said.

Chief of Cordele Police Department, Rob Rodriguez gave his condolences to the family as well.

“He worked with our department. Our hearts are heavy for sure with the loss of any life, but when it’s somebody that you work with, or have worked with, or friends with, it definitely hits home. We’re praying for him and his family and for the speedy recovery of his daughter. It is a great loss to the community,” Rodriguez said.