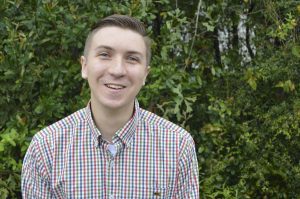 CORDELE– Cordele First United Methodist Church, affectionately known as Cordele First, has a new youth pastor named Kody Franks. Kody is a 26-year-old Cordele native who only just began the job on February 19, 2018, on President’s Day. Kody grew up in Cordele and graduated from Crisp County High School in 2009. The only time he has not lived in town was when he was attending Georgia Southern University in Statesboro. Kody lived there for four years while he worked to earn his Bachelor’s degree in Biology with an interest in mind of becoming a zookeeper.

Even though Kody felt the inner calling to become a youth pastor, he ignored the feeling for as long as he could. He was concerned about the stereotypes of pastors, that to be one, a person had to be “perfect” and worried about the task of speaking to others about Jesus.

“My senior year there I got to do research with the school and so I would observe the rivers. I could tell you how polluted it was, what it was polluted by. I ended up at a conference and I got offers to do my Master’s at UGA and Murray State and it just didn’t feel right. I felt like I was being led to be a youth minister, but I didn’t want to admit it because I didn’t want to be a pastor. That’s what I told myself and so I put it off a semester, and I thought ‘Alright, I’m going to start taking this seriously. Then I’ll actually look at it.’ Then I put it off another semester, and I thought, ‘You know what? I’m not going to do it. I’m going to go to seminary and be a youth pastor.’ So I felt the calling when I was in college, I just didn’t want to admit it,” Kody said.

Kody moved back to Cordele after graduating and began working as a Children’s Ministry Intern at his home church, Pinecrest. This is Kody’s third year working the internship and at the same time is currently enrolled in Southeastern Baptist Theological Seminary located in Wake Forest, North Carolina.

During his time so far at seminary, Kody has come across teachers who break the pastor stereotypes.

“One of my teachers literally looks like a biker. He’s got a bald head, has a huge beard and he jokes about that quite a bit. I’m not trying to fight it now, simply now that I know that there’s not a mold for pastors, that pastors can look and act in a variety of different ways,” Kody said.

Just after beginning his studies at Southeastern Seminary, Kody worked to receive his substitute teaching certification so he could have a job while attending seminary.

“I had been offered the job at Cordele First probably less than a year after I started in Seminary. It was my first summer in school and I immediately said no. I had just started, so I was nervous about taking on a full-time position. So they hired someone else, it didn’t work out and so they approached me again in November,” Kody said.

This time Kody accepted the job and now, Kody is working on building a relationship with the students who attend the church. The position had a history of high turnover rates, and Kody wants to change that.

“I have to show them that I’m planning to be here for the long run. I think that makes them feel better since I’m a local. I’m working right now with the current students, going to their events whether it’s sports, literary or anything like that. Then on Wednesday night and Sundays are of course my big time there at the church specifically,” Kody said.

Kody keeps a busy schedule planning events, mission trips, dropping by local schools to talk with students and coaching soccer at Crisp County Middle School. Kody summed up his vision for what he wants to do while working his youth pastor position in three main points.

“I want to have students that disciple each other. Number two is Evangelize, I want them to be able to share their faith with other people and know why they have their faith, and number three is adoptive family. When you’re saved, you’re adopted into the family of God. Christ has adopted us and he’s our mediator. A lot of people in the community don’t have families and so they have a skewed view of what a family is and I believe that church can show, especially students, can show people in the community what a family is and be that family, that unconditional love. We love you no matter what because Christ loves you no matter what,” Kody said.