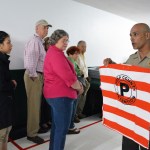 Jail Operations Major, Joey Arzola shows a tour group what imates wear while they are in the Crisp County Detention Center. 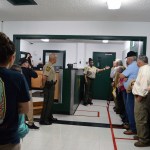 Detention Officer, Corporal Rose Harris shows a tour group the processing room for booking inmates into the jail when they first arrive.

CORDELE– The Crisp County Sheriff’s Office hosted their 2nd Annual Open House on Saturday, April 7. The main goal for the open house is to improve the ability for the Sheriff’s Office to reach out to the public and show the community how the office operates.

About three groups of a dozen citizens each were guided through a tour of the Sheriff’s Office operations. In total, just over 40 people attended the open house.

The tour walked groups through each division of the Sheriff’s Office and how they operate. This included Investigations, Animal Services, K-9, Detention, Mid-South Narcotics Task Force, etc.

Sheriff Billy Hancock invited tour groups to see his office as well as peek inside other Deputies’ offices.

The Sheriff’s Office has been serving the Crisp County community for 112 years and has grown to include 59 Deputies, 23 Detention Officers, 14 Communication Officers and nine civilian employees.

Sheriff Billy Hancock is the 11th Sheriff to serve Crisp County and according to his message in the Open House brochure, “I pride myself on being accessible to the community and having an open-door policy.”