Pool Room to open end of May, searching for memorabilia

CORDELE– The Cordele Recreation Parlor, affectionately called the Pool Room is tentatively set to re-open at the beginning of the summer season: by the end of May or beginning of June 2018.

The Pool Room has been closed since a fire occurred in the early hours of January 6, 2018 from a hot dog steamer left on overnight. The owners, Randy and Jazmin Bridges have been working to reconstruct and renovate the Pool Room ever since.

The owners are working on updating the restaurant while preserving as much of the history as they can.

For instance the bar, which originally was on the right-hand side of the restaurant walking in, is now going to be on the opposite side to accommodate a ventilation hood for cooking and to be up to date on codes.

The walls are going to be exposed brick and the original marble floors will be polished and preserved.

“We’ll put the old tin tiles back up on the ceiling, so that’ll be back to historic. We’re going to have a women’s bathroom, that’s new. We’re trying to make it a family-oriented atmosphere,” Randy said.

For the first time, the Pool Room will have sit-down booths to encourage families to order food and sit in the restaurant.

“We’re having to go to non-smoking mainly because we’re opening up that back wall, we took that back wall down. So it’s going to be a non-smoking environment. The pool tables are so valuable; we can’t afford to have smoking around them,” Randy said.

The 87-year-old pool tables, which are Randolph series Brunswick tables dated from April 21, 1931, are being reconditioned and will continue to be used in the Pool Room.

Freshly designed logos are coming out that will be printed on t-shirts and mugs for customers to purchase.

There will be additions to the menu: hamburgers, fries, chicken tenders, homemade corn dogs, and sweet tea along with some breakfast options such as sausage dogs.

As the re-opening draws closer, Jazmin and Randy are looking for people in the community to donate items tied to Cordele in some way to be preserved and used as decoration in the restaurant.

“We would like people to donate memorabilia that’s a historical nature or even if it’s just from our community. It doesn’t have to be that historical, we’re going to do a mural on the wall and it’s going to have all the way from when we started up until now. So there are a lot of things that have happened. It can be anything from then in 1939 to 2018. I just want it to be from us, like Cotton Gin stuff. My grandfather used to come here all the time and he used to wear this hat. If they want to submit it, we would like to put it in a box and preserve it,” Jazmin said.

Jazmin and Randy also want to include who has donated each item and put their names on display with the preserved items. Bottom line is, Randy and Jazmin want to tell the story of Cordele and the Pool Room to the customers who come and visit.

Anyone who would like to donate items to the Pool Room should bring it to the Cordele Historic Museum located on 105 E 9th Ave. in Cordele. 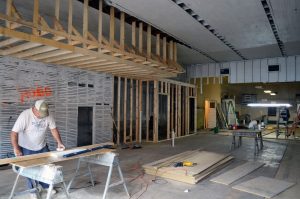 Crews are working on renovating the Pool Room. This photo is the progress so far as of Monday, April 9.