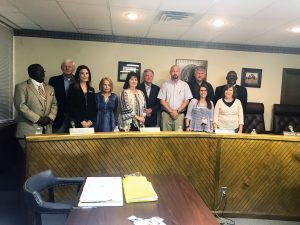 CORDELE- The Crisp County Commissioners held their regularly scheduled meeting on Tuesday, April 10 in front of a full meeting room.

The meeting started with a proclamation from the County Administrator that April 8-14 is National Crime Victims’ Awareness Week, which was adopted by the board of commissioners.

Up next was a presentation in reference to National Autism Awareness Month. An Autism Stroll will be held on April 21, from 10 a.m.-12 p.m. at the Crisp Regional Walking Track. The event is to help show support for those families who have been affected by Autism.

The commissioners then adopted a proclamation declaring that Tuesday, April 3 was National Service Recognition Day to thank those involved who give so much back to the community.

The County Administrator subsequently read a final proclamation declaring that April 2018 is Donate Life Month to help shine light on the need for organ and tissue donation through the Georgia Donors registry.

Additionally, the commissioners approved a Ford Motor Credit Application for the lease of two police interceptors for the Sheriff’s Office.

In the public hearing portion of the meeting, the commissioners heard a request from Commodity Distribution Systems, LLC in reference to rezoning a parcel of property located at 158 South Coney Road. Commodity Distribution Systems is looking to have the area rezoned from residential use to industrial use so that they can create a railroad car storage area. Currently 26 empty railcars are stored in the railroad space, and according to Commodity Distribution Systems Company Agent, John Basnar, no harm would be intended for the area if the request was approved. Basnar also says that there will never be more than 26 cars in the zone at a time, and he also says that the approval of the rezoning would mean a slight increase in jobs and tax dollars.

The commissioners then heard many arguments for and against the rezoning after the request. Arguments for the train car storage were mostly about the potential tax revenue that the rezoning would give to the county. The arguments against rezoning stemmed from the value of properties in the area dropping, the proximity of an industrial zone to residential homes, potential noise problems and possible environmental pollution to Lake Blackshear and the surrounding areas. The commissioners did not make a decision on the request and tabled it for further discussion.

The next regular meeting of the Crisp County Commission is set for Tuesday, May 8, at 9 a.m. in the government building located at 210 S 7th St.