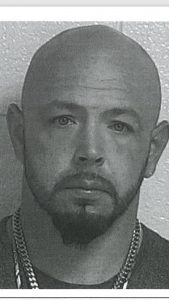 Over the past several weeks, multiple residential burglaries have occurred in Wilcox, Houston and Twiggs counties.  The investigation led to the identification of Shane Joe Saip as a suspect in the burglaries.  On April 12, 2018, Houston County investigators arrested Saip on a Wilcox county warrant. Saip had an outstanding warrant for the burglary of a Wilcox county home which occurred April 3, 2018.

After the arrest investigators in Wilcox and Houston counties executed a search warrant for the residence of Shane Joe Saip in the 200 block of Arnold Boulevard.  The search resulted in the recovery of stolen property which has been linked to multiple residential burglaries in Wilcox, Houston, Twiggs and Peach counties.  Items recovered include jewelry, clothing items, electronics, musical equipment, sports collectibles and firearms. Illegal narcotics were also recovered during the search.

Investigators have evidence that links Saip to approximately twelve residential burglaries which have occurred since January 2018.  Most of these cases involved forced entry into homes located in the Middle Georgia area.

Investigators also arrested 28 year old Evelyn Louise Parker  on a warrant for a probation violation.  Parker was located at the residence along with Shane Joe Saip.

Saip if currently being held at the Houston County Detention Center without bond.  Saip is facing multiple burglary charges in Houston County as well as charges related to Firearms possession and VGCSA, Possession of Methamphetamine.  In addition , Saip is being held for Wilcox and Twiggs counties for burglaries in those jurisdictions.