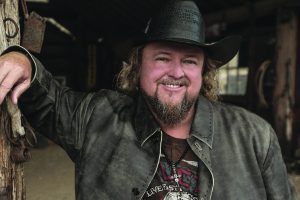 CORDELE– Country rapper Colt Ford will be coming to Cordele to perform a benefit concert in honor of fallen GSP trooper, Tyler Parker who was killed in a car accident in March. The concert is to help support his surviving family: three-year-old daughter Savannah and wife, Christy.

100% of the proceeds will be going toward helping Tyler Parker’s family.

Colt Ford is originally from Athens, Ga. and had heard about Tyler’s death in the news.

“Being a Georgia guy keeping up with what’s going on, ya know, where I’m from. I saw it on the news and it immediately just kinda hit home for me. I support our policemen and first responders,” Ford said.

Ford immediately felt the need to take action, and contacted a friend who lives in the Cordele area to begin organizing an event to help. Ford had previously performed a benefit concert back in 2011 for two police officers in Athens, one of which had lost their life in the line of duty.

some success in whatever you’re doing, if you don’t give back then you’re kind of losing at life. I’ve been lucky and blessed to be able to have some success in music and Georgia has always supported me,” Ford said.

Ford was able to fit this ‘Hometown Throwdown’ in between his already scheduled Dynamite tour dates. Ford is going to perform his full show at Cypress Grill on Wednesday, May 2 beginning at 7 p.m.

“I’m doing it for free; they’re (Tyler’s family) taken care of. Every dollar that walks through the doors is theirs,” Ford said.

The benefit concert will also have an auction, which will include golfing with Colt Ford. The concert is presented by country music radio station; K-Country WKAK and tickets are $30 for reserved seats and $20 for general admission. Tickets are available on www.freshtix.com and will be available at the door.