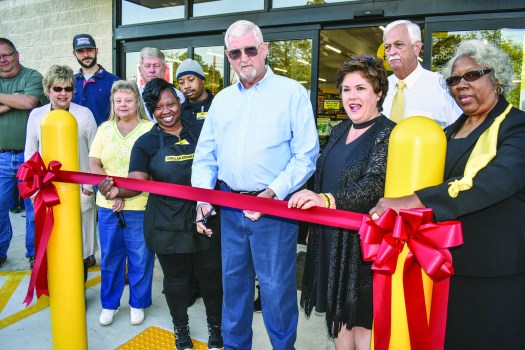 Pineview Mayor Holland Wilson prepares to cut the ribbon as Store Manager Shakita Lewis and City Clerk Angela Bloodworth join in with others for the official DG Grand Opening. 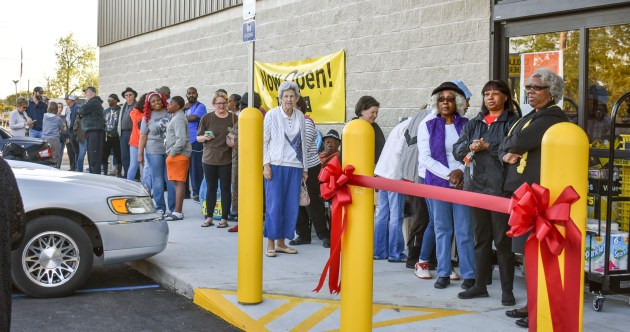 A long line of happy customers wrapped around the store located in the tiny town of Pineview. 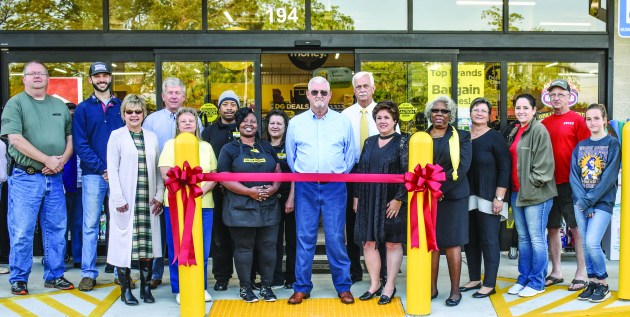 Anticipation has been high for the community of Pineview, Ga., since news broke during the latter part of 2017 that a Dollar General would make a new home in the small, rural community.

On Wednesday, April 18, that anticipation became a realization to customers as Dollar General opened their doors to the public. The official ribbon cutting was held Saturday, April 28, and attendance was high as a long line of people wrapped around the store to be among the first to receive a $10 gift card and other giveaways.

Pineview Mayor Holland Wilson commented, “This Dollar General is a tremendous blessing to our community, and we are so very thankful for it.”

The tiny, one-caution light town of Pineview is located in the northern central tip of Wilcox County just a stone’s throw from Pulaski County. The town has never had a store of this size with such a variety of merchandise. Due to its location, Pineview residents had to drive 15 miles or more in all directions to shop for the items now offered in selection at Dollar General. Now, the realization of its own Dollar General affords those people low prices and convenience.

“It’s an overwhelming blessing for the elderly and those who don’t drive,” stated longtime resident Ronnie Barentine.

The new Dollar General is located in the heart of Pineview, a town of approximately 500 residents, so numerous residents can walk to the store. For others, the Dollar General close to their doorsteps takes on another convenience as voiced by resident Kay Stone, “Many times after a long day of work in Hawkinsville, I don’t want to stop anywhere even though I may need something. I just want to get home and relax. Now that this new store is in town, I can go on home, relax and then head over to Dollar General for my needs.” Kay and her husband, Grover, live less than a mile from the store.

Sheriff Robert Rodgers has increased patrol in the Pineview area to ensure more safety to the community now that the Dollar General has opened.

Store Manager Shakita Lewis reported that business has been great and expects that trend to continue.