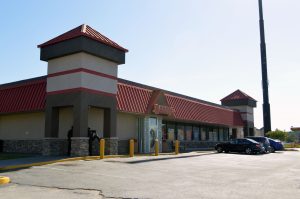 CORDELE– Gary Teasdale, the general manager of Denny’s located at 2115 E 16th Ave. is glad law enforcement was so quick to respond to a stabbing incident at the restaurant back in late March.

A server’s ex-boyfriend had entered the restaurant with a hunting knife on March 23 at approximately 1:08 p.m. The suspect, 60-year-old Craig Walker chased the server beginning at the server’s line, down to the end of the cook line where she could not run any further.

“I went around the corner to the cook line and I saw the individual on top of my server, trying to stab her to death, and all he kept saying was he was going to kill her. So I ran down there and I yanked him off and I basically threw him to the floor and got on top of him and held his hand down with the knife. One of my employees took the knife out of his hand and at that point 911 was called,” Teasdale said.

Two Crisp County Sheriff Deputies, Corporal Kenny Purvis and Deputy First Class Avery Hillman arrived at the scene within seconds. They had been doing rounds and happened to be next door at the Pilot when the 911 call came in.

“They were the first two on the scene, they came in with their guns drawn because they were under the impression the guy had a gun,” Teasdale said.

Law enforcement found that the suspect was carrying three knives. Walker had tried to stab Teasdale in the head multiple times while being restrained.

The court hearing for the stabbing will be on June 5 next month. Both the server who was targeted and Teasdale will be testifying as victims of the incident.