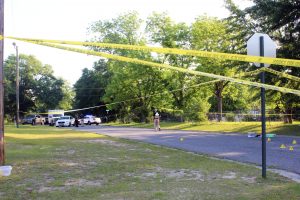 CORDELE– The Georgia Bureau of Investigation in conjunction with the Cordele Police Department are investigating a homicide that occurred in the early morning hours of Tuesday, May 8.

Officers of the Cordele Police Department responded to calls for service of shots fired in the area of the 600 block of West 21st Ave. During the initial on-scene investigation, the officers discovered a residential home had been struck with what appeared to be bullets; however, as the officers were securing the scene, the E911 center received notification that an individual had just arrived at the emergency room located at Crisp Regional Hospital appearing to have been shot.

The victim was later pronounced deceased.

Suspect(s) were not at the scene when law enforcement officials arrived.

“This is another example of the unnecessary loss of life at the hands of a senseless, violent act. Because this is an active investigation, we will not be able to release the name of the victim or any specific details surrounding this incident at this time. However, as soon as we are able to release that information, we will. If anyone has any information pertaining to this incident, please contact the Georgia Bureau of Investigation or the Cordele Police Department at 229-276-2921,” Chief Rob Rodriguez said.