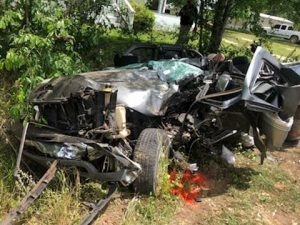 Marvin Hillman Sr.’s truck in the aftermath of the crash on May 5.

ROCHELLE– On Saturday, May 5 at approximately 12:30 p.m. two vehicles crashed into each other on GA 112. 19-year-old Jordan Ledford was driving Southbound in a Ford F250 and 28-year-old Marvin Hillman Sr. was driving northbound in a 2000 Chevy Silverado with his four-year-old son Marvin Hillman Jr. in the backseat. Ledford’s vehicle traveled into the northbound lane in the path of Hillman’s vehicle. Ledford’s vehicle hit the left side of Hillman’s Silverado. All individuals involved in the crash survived. Air Evac took Hillman Jr. and Sr. from the scene to Navicent Health Center in Macon. Marvin Hillman Jr. is in critical condition and the family is hoping Hillman Jr. will be stable enough to be transported for further treatment at a hospital in Atlanta. Marvin Hillman Sr. is in better condition but according to his wife, Rachel Hillman, he has a long road ahead of him.