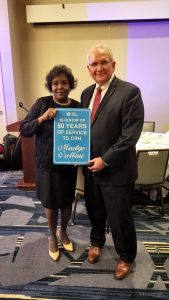 Life-long Cordele native, Magadalene “Madge” Hodge Outlaw is celebrating her 50th year as a nurse at Crisp Regional Hospital. Crisp Regional recognized Madge for her 50 years of service during their employee banquet on Thursday, May 10.

Madge began her nursing career on September 15, 1968 as a Licensed Practical Nurse (LPN) after she was accepted to the Manpower Development and Training Act (MDTA) right out of high school. Originally, Madge had thought she would want to be a Special Education teacher.

“I was accepted at Alabama ANM, but they overbooked the dorms so I couldn’t live on campus and my parents couldn’t afford for me to live off campus. So I interviewed for a job and the employment office called and said I’d been accepted to a nursing program,” Madge said.

For the next 12 years, Madge worked as an LPN and attended school during the last two years. Madge earned her Associate’s Degree in 1981 and Bachelor’s of Science in 1996. Both degrees are in nursing and are from Georgia Southwestern State University.

Through the years, Madge’s main full-time job has always been nursing at Crisp Regional, but she has worked other various part-time jobs teaching and helping others.

In Madge’s time as a nurse at Crisp Regional, she has seen many changes in the way the hospital is run.

“I think the difference in the physicians then (as opposed to now) is that I think it’s more of a partnership. I feel connected to the doctors more so than I did back in the day. Even though, like making rounds with the physicians, of course you’ve got to have a relationship with the doctors doing that. I think today the relationship is a lot more of a collaborative relationship, opposed to ‘I’m your boss and you have to do what I say.’ Even though you have to do that, a nurse cannot function without the doctor telling us, giving us orders, but I don’t see it as the doctors right now being your boss. It’s more of a collaborative team effort now between doctors and nurses than it was back then,” Madge said.

At 68 years old, Madge does not see herself retiring any time soon.

“Maybe in a couple of years,” Madge said.

Madge plans to have a party of her own later this year in September to celebrate her official 50th anniversary in nursing.