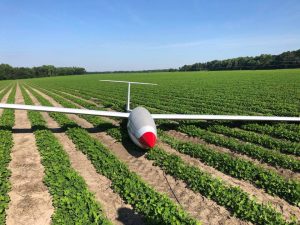 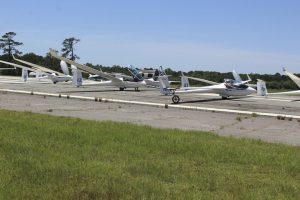 CORDELE- On Saturday, the Soaring Society of America’s Region 5 South Glider Competition began at Cordele-Crisp County Airport. Glider pilots from around the country race in fiberglass gliders, or sailplanes, in an attempt to cover a specified distance in the fastest time during the event. The Sailplanes are towed up to about 2000 feet by airplanes that then release them, and the glider pilot then awaits the instructions on the objective. Once airborne, it is the pilot’s job to keep the sailplane aloft by using the rising air currents. The racecourse varies from day to day based on what the weather conditions look like.

“Many of the gliders have been assigned to go to specific points to towns out there,” said race director Robin Clark during Monday’s competition. “We have 25 waypoints. It was Hawkinsville and Fitzgerald today, so 101 miles. They have what is called data loggers in their gliders that record that they have achieved the point.”

During Monday’s event, the conditions did not seem to be ideal for some of the racers, and a few of them had difficulty making it onto the right course after takeoff.

“This was a tough day since there were no clouds to mark,” Clark explained. “Some of

In those situations, the pilots will land the gliders in safe spots, like another airport or local farmland. One even landed in a peanut field in Wilcox County on Monday afternoon.

Over the last few years of competition in Cordele some big-name glider pilots have made appearances at the events.

The event started this past Saturday and will continue up through this coming Saturday, June 9. The public has been invited to come watch the launch and return of the gliders at the airport during the event. Launch is normally scheduled for 12-1 p.m. and returns between 3-5:30 p.m. depending on the weather conditions. “We have really appreciated how much the Chamber of Commerce has helped us and supported us all of these years, and airport management, Doug Cooper, has been great,” Clark concluded.