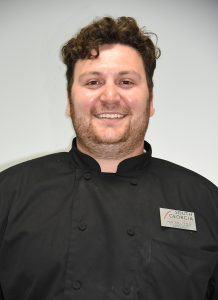 CORDELE – South Georgia Technical College Alumnus Hunter Little of Cordele has been named the new full-time instructor of the program he graduated from in 2009 – culinary arts. SGTC President Dr. John Watford recently announced that Little will oversee the program on the college’s Crisp County Center campus and will report to Dean of Academic Affairs Dr. David Finley and Vice President of Academic Affairs David Kuipers. Julie Partain, Dean of Enrollment Management at the Crisp County Center will oversee his day-to-day activities.

Little brings with him an extensive career and education in culinary arts that is rooted in South Georgia. As a Dual Enrollment student from 2007 to 2009, he received his Prep Cook certificate and a Restaurant Operations Specialist certification from SGTC before going on to attend Le Cordon Bleu College of Culinary Arts in Tucker. While attending Le Cordon Bleu, Little accepted an internship at Walt Disney World in Orlando, FL where he would further craft his culinary skills. He graduated in 2011 with an Associate of Applied Science Degree.

During his time in college, Little worked his way up the chain of Cordele restaurant T.J.’s Italian American Restaurant – moving from a line cook to the assistant manager in just three years. Upon his graduation from Culinary School, he continued to climb within the business, eventually making his way to the position of manager, where he would oversee all aspects of daily operations. He worked in this capacity until 2016 when he took a job with Chicago based company PortionPac Chemical Corporation, where he worked as a service technician for the company – providing cleaning and sanitation chemicals to local school systems.

About his return to South Georgia Tech, Little says in his resume that he just wanted to get back to what he loves – culinary arts.

“I would like to get back in the culinary world as well as train and teach the next generation of chefs,” he said.

As a culinary arts instructor, Little will provide instruction to students about the current safety and culinary procedures and skills in the Culinary Arts field.