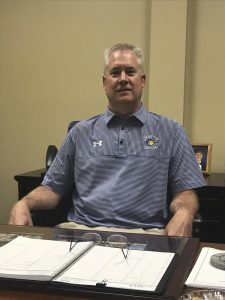 CORDELE- Crisp County School Superintendent, David Mims, announced last week that the upcoming school year, 2018-2019, would be his last year with the school system. Mims says he wanted to give the school system enough time to search for the right replacement.

“Well I decided to retire effective June 30, 2019. I wanted to do so now in order to give the board plenty of time to find a good replacement, so to not drop it on them at the last minute and to be fair to the system. So that’s why I decided to go ahead and tell them now,“ said Mims.

Originally from Valdosta, Mims has been superintendent for the Crisp County School System for several years now, and has spent much of his career with the system.

“I have been superintendent since April of 2014. I became interim in 2014 and was named the superintendent about six months later. I have been in the system for 15 years, and I will have 31 total years in education,” he said.

Mims says he started his career with the Ben Hill County School System before moving to Crisp County and has done a little bit of everything within his time in education.

“I started my career in Fitzgerald. I started as a girls’ basketball coach and was also a tennis and softball coach. I was a teacher of social studies, which included economics, world history and US history. And then I got into administration,” Mims explained. “I have been an assistant principal at an elementary school, a middle school and a high school. I have been an athletic director on two occasions. And I have been a principal at a middle school and a high school. Then I was assistant superintendent here, and then superintendent, all of that between Ben Hill County and Crisp County. Half of my career has been in Crisp County.”

Mims was delighted to note some of the accomplishments of the school system within his time in Crisp County.

“We have really had a good focus on academics, while I have been here, and some facility upgrades. We are very pleased where we are, especially with our graduation rate at the high school, which is at the highest it has ever been,” said Mims. “We presented our first balanced budget that the board approved this year for next year. And our facility is in really good shape with the upgrades that we have made. And with the moving towards the building of the new middle school, there have been a lot of things that have taken place.”

When asked if he had any future plans for his retirement, Mims said he had not put much thought into it yet.

“I don’t currently have any plans right now, just probably try to take it easy. My father was a principal, so like I said, I have been in schools all my life. So I think it will be time to try to take a break while I can,” he said. “I would just like to say that Crisp County is a great place to work. It is great to be a Cougar and I have really enjoyed it. And hopefully they will be able to bring in the right person to lead the system. We have a great system, and I can only say positive things about the Crisp County School System. It has been an honor to be the superintendent here, and I’m not leaving until June 30, 2019,” he concluded.